Sideways ….. in-your-face ….. lashing against the windows….. drifting like mist …. stair-rods…. cats and dogs ….. hammering down ….. beating on the skylight ….. getting under your brolly…..  have you guessed yet? 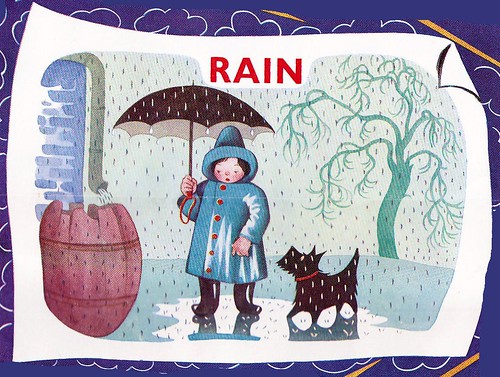 It is simply pouring down.  I’m so pleased that although it was overcast, it remained dry while Rosie was here and on Friday we took a picnic to the beach.  Rosie also took quite a few photos of the furry one (she is his biggest fan) and sent me this shot – spot the tennis ball he is clutching in his mouth!

I think it was supposed to be more of an action shot – we tried to encourage Ben to gallop across the sand, but he preferred more of a stately trot as you can see!  But we had great fun and luckily all the smelly seaweed had washed away again so there was no repeat of the rolling incident!  The upside to the dreadful weather we’re experiencing today though, is that I have been able to spend a guilt-free morning stitching – and with the next issue of the Bustle & Sew magazine out next week, I needed to spend some time finishing off this month’s projects. … 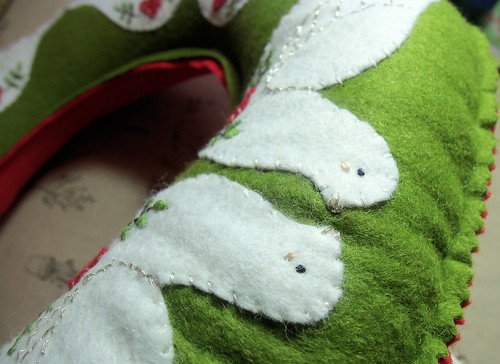 I think felt comes into its own at Christmas – such lovely cheerful colours and so easy to use – no fraying at the edges or worries about joining seams on the bias.  I have used just three colours of felt in my Christmas Dove wreath, plus some hand embroidery details… 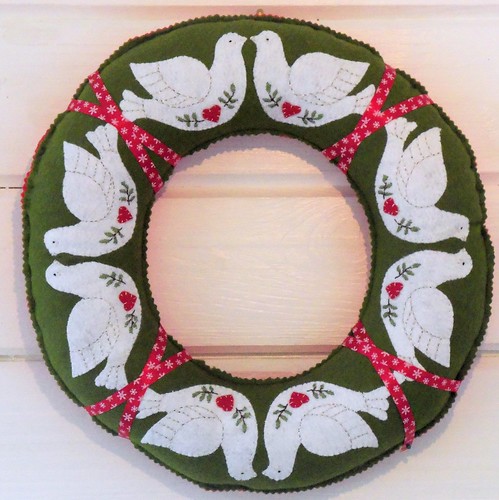 It’s really easy to make and as it’s all hand-stitching it’s a great project to snuggle down with in the evenings.  Sorry about the  dreadful photo quality in this image – I had to put the light on in the summer house to get any sort of photo as it’s so dark and grey here – but it shows the general idea.  I’ll take some better pictures when the sun comes out again!

PS – the sun has come out at the end of the day and this is a much nicer picture – I think! 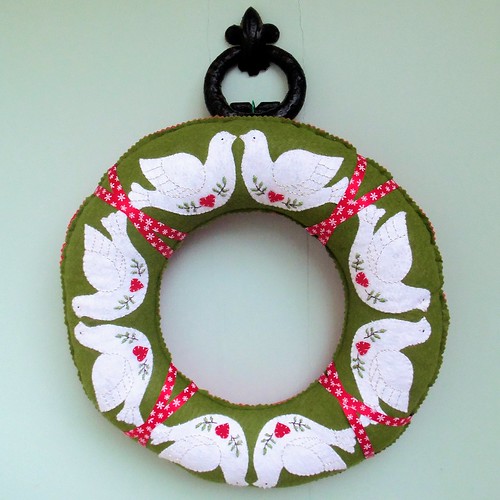 What a pretty wreath! Very festive! I agree that felt is a wonderful medium, especially this time of year. Always looks so cozy!
Great picture of Ben!
X Linda

Helen, as always… this is another georgious design. Can’t wait for the magazine 😉

Your wreath is quite lovely. I always enjoy seeing pix of and reading about Ben. Give Ben an ear scratch from me.

Oh yes, I know all about the rain over here in Vancouver! And how hard it is to get a good photo!
I love that wreath and can’t wait for Thursday so I can get started on the pattern. Very lovely!