Neither envy nor jealousy are attractive emotions  and I must admit I wasn’t too clear on the difference between them until I found the definition above.  Then I realised that jealousy is most frequently exhibited by my rather greedy Newfies. Ben in particular will stare very hard indeed when treats are being given out to make sure he, rather than Miss Daisy, has received the largest, tastiest portion of whatever’s on offer.

But I have not been suffering from jealousy, but rather have been the victim of a nasty case of sewing envy.  Let me explain ….

Earlier in the year I watched, and very much enjoyed, the Great British Sewing Bee.  Above is the winner, Heather, with the object of my sewing envy – her pincushion dog!!  Oooooh, how I envied that dog.  Every episode she would retrieve it from her bag and place it firmly on her work table knowing she’d have everything she needed readily to hand.  I, on the other hand, am always losing my tape measure, finding my needle book is elsewhere and scissors, well let’s not even think about the places they need to be retrieved from.

Over time though, I came to realise that it wasn’t so much Heather’s dog itself I was envious of, rather than the idea that all those essential bits and pieces could be instantly to hand in a practical and easily portable form.  Then, one afternoon, as I was sitting in the summer house drinking (probably about my third cup!)  tea, inspiration came to me ….. 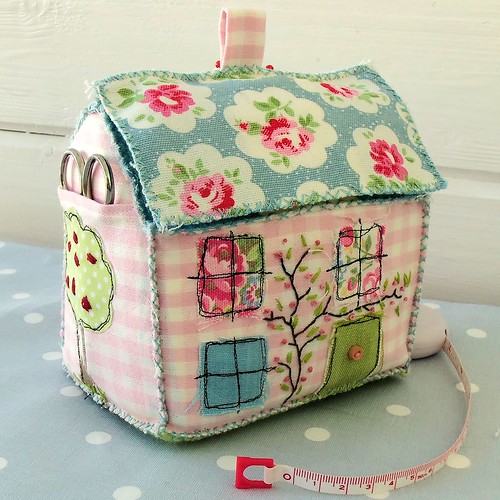 My September House pin cushion.  It’s more than just a pin cushion though.  Firmly stuffed with a few beach pebbles weighting the base (Heather’s dog always went down with a satisfying thud), it has a needlebook hidden in its roof as well as pockets for scissors and tape … 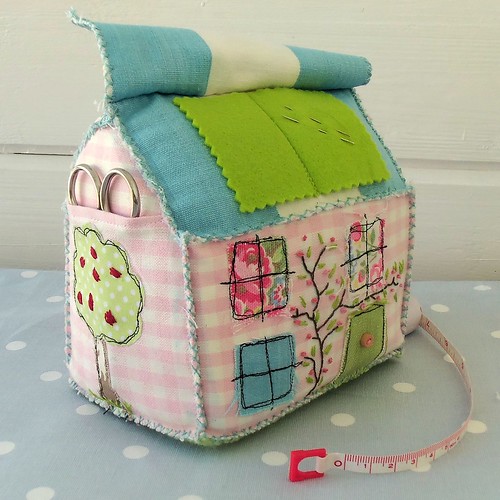 And then some room for pins of course …. 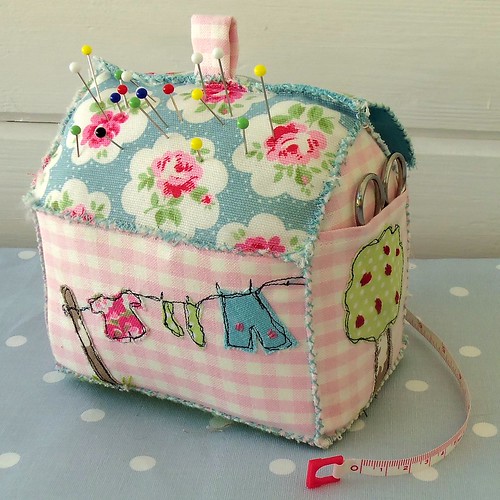 And my case of sewing envy is cured!

The pattern for my September House pin cushion will be in the September issue of the Bustle & Sew Magazine published on Thursday 28th August.

What a brilliant idea. I really must give something similar a try….Maybe a cat! Blessings

What a great idea. With four young children I never know where my pins etc are as I hide them away every time – it takes me longer to find them to actually so the sewing!

That is so fun! and awesome looking. How clever.

What a fun and practical house! I absolutely adore the washing on the line!

That is the cutest pin cushion ever. How do you do it. I am always looking for my scissors and tape. A definite must make. Thanks Helen

Fantastic idea and what a great way of curing your bout of envy. Have a wonderful time using it and thank you for the opportunity of sharing it when your September issue comes out.

Love it, cant wait to get the September magazine.
Ang

What a clever lady you are, that is a beautiful house and yet so practical 🙂

Hi Helen,
I, too, loved Heather’s dog and I think your little ‘sewing house’ is a brilliant idea and almost perfect – you forgot to put Ben and Miss Daisy on it!
As usual I can’t wait for next month’s magazine to come out. Thanks for giving us all such an inspirational magazine to look forward to every month.
Diana.
xx

Aw, thanks so much Diana, delighted you’re enjoying the magazine xx

Oh it’s a perfect home for all my sewing needs! I can’t wait for the September issue!
X Linda

Lovely Helen, pincushions are my fave thing to make. I have made so many over the years but they are all knitted ones. Cannot wait to see the new issue for the pattern.

Wonderful! What a smart idea and it looks amazingly cute!

I love it can wait for the September E-Zine!! I am going to have to make these for my sewing group for Christmas..perfect gift for my Lovely Ladies!! 🙂

Oh wow, a dream cottage. I cannot wait for the magazine to make one!
Julie xxxxxxxx

I really like this house! What fun decorating it will be. 🙂 I look forward to making a couple of them (what great gifts for sewing friends:)

Thanks Linda, and what lucky friends to receive handmade gifts xx

Dear Helen,
After seeing your Little Sewing House, I wanted to make one too, so I decided to take out a subscription to your magazine and I am so glad I did.
Lovely things to sew and make and also lots of lovely things in your online shop, at a discounted price. So generous. At a good time too, as, Christmas is coming and time to make some sweet gifts. Thank you so much.

Aw, thanks so much Angela, delighted you’re enjoying it. xx