2012 was of course the year of the Olympics (as well as the summer when it hardly ever seemed to stop raining!).  We all waited outside to see the torch, which came right past my front door …. 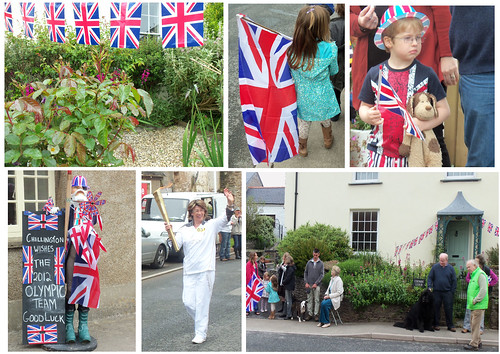 And as the event unfolded I became very proud indeed to be British.  Not because of winning medals, though that was a source of pride of course, but because we put on such a friendly, well-managed and visually stunning event.  I was absolutely blown away by the opening ceremony with its marvellously designed, creative and, above all, eccentric take on British history, and also adored the closing of the Games with its party atmosphere celebrating the best of British performing arts.  I even received an email from a very lovely lady in the USA who wanted to congratulate us on the Games, and not knowing anyone else over here had decided to email me!

This all sewed a little seed in my mind that one day it would be lovely to celebrate British design and creativity in the Bustle & Sew Magazine.  And, with a lot of help from Rosie, this month saw the first of our series of “Best of British” featuring design-led businesses from across the UK.  In January’s issue we are very proud to feature Poppy Treffry, whose colourful and quirky range of gifts, homewares and fashion accessories featuring Poppy’s own distinctive freehand machine embroidery are popular worldwide.  Poppy founded her company in 2004 and still designs all the products, assisted by a small, skilled team who make them up by hand with love and care. Over the last ten years Poppy’s business has grown from  just Poppy (the person) and her Singer sewing machine playing around with some of her hoarded fabric stash – to a global concern supplying over 100 stockists around the globe in cluding Fortnum and Mason, Liberty, Anthropologie and White Stuff as well as direct to the public through her shop in St Ives, Cornwall and online at her own website. If you’d like to read more of the Poppy Treffry story and see the full range of her designs then you can do so over on her website – www.poppytreffry.co.uk  Thanks so much Poppy for being the very first business in our Best of British feature!

Fantastic – I love the idea of The Best of British (I am English although I live on Vancouver Island Canada). I really enjoyed your post above and look forward to reading more about Poppy Treffry – I really like her sewing machine piece – I’d love to make one of those for my sewing room.
Happy New Year Helen
Pauline Perry