Yes, back in the garden again!  This time to take photos of the last project for the March Bustle & Sew magazine – published this Thursday – so yes, I’m cutting it fine, but I was quite determined to include this design as it would make a lovely no-calorie gift for Mother’s Day (celebrated next month over here). 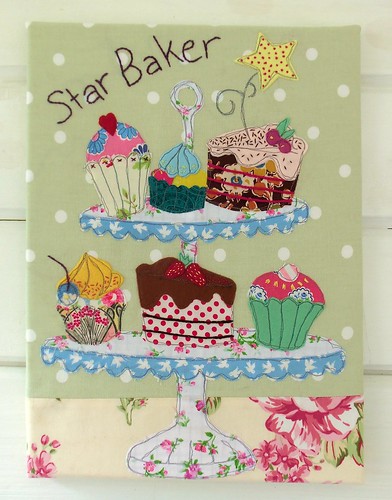 I’ve decided to take all my pattern photographs in the summer house now – I’m trying to achieve a consistent Bustle & Sew “look” and I think the white walls make a nice uncluttered background, working well with all sorts of designs.  They also act almost like a giant white box, bouncing light around inside giving a nice bright feel to my photos.   This design was a lot of fun – combining freestyle machine embroidery with accents of hand stitching to give it a little something special.

When I’d finished photographing my Star Baker project I thought I’d take some photos of some of my spring blooms.  The hellebores are particularly nice this year, but it’s fair to say that they’d have been even nicer if they hadn’t been trampled on by two sets of large furry paws! 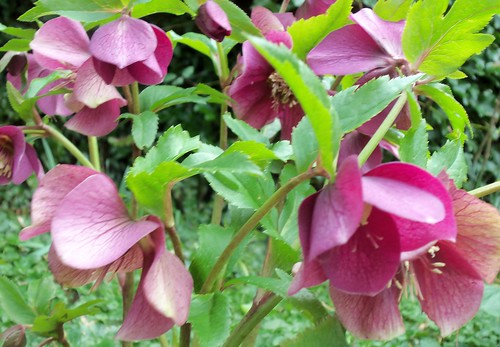 Sadly I only took a couple of shots because as I was advancing towards a particularly nice clump of daffodils,  I heard a commotion coming from behind me.  I turned around, and what did I see? 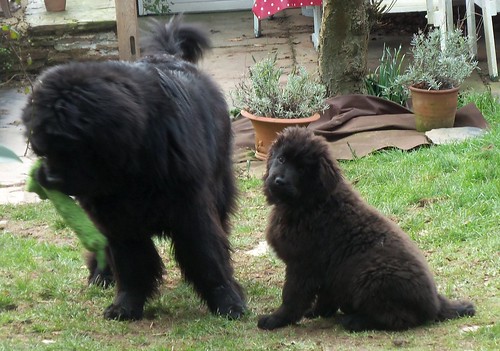 Mum!  MUM!!  Ben took my new toy.  Make him give it back!  MAKE HIM GIVE IT BACK!!   What?!  You say we have to sort it out ourselves?  Right!  I’ll show that black furry lump what a determined young newfie can do! 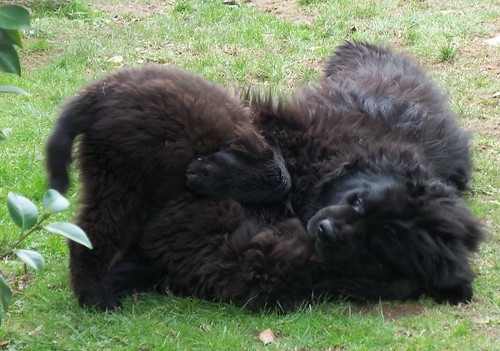 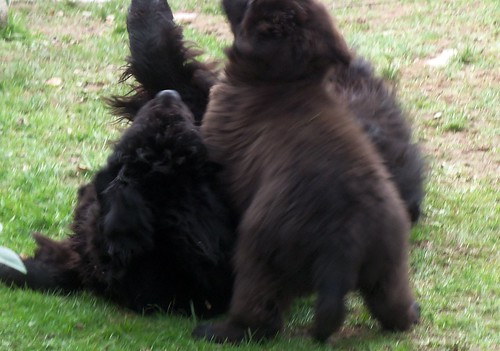 Sorry I chopped the top of Daisy’s head off – I was laughing so hard it was hard to aim the camera!  It’s a good thing Ben is so very sweet natured and easygoing as he is about five times her size and could easily win any argument if he chose.

And finally – here’s the cover for the March issue, I’ve tried to make it look spring-like, rather like my poor trampled garden. 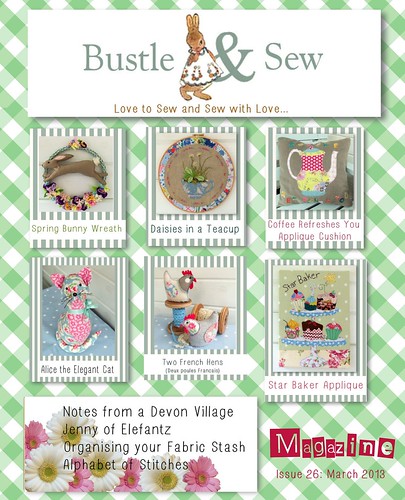 I love it! I can’t wait to see this month’s issue.

When my lab was a puppy we were in a ‘puppy obedience class’ and the trainer raised and showed newfies. At the end of the hour we’d have free for all puppy play time. My dog was very high energy and needed come down a notch so the good old newfie would do what we called ‘the newfie squash’ – he’d just lay on top of her until she calmed down and then release her! Does Ben do the newfie squash?

Hi Denise – that sounds like such fun – the newfie squash! No, Ben doesn’t – but I think Daisy is working very hard on developing hers!

LOL You go Daisy!! Your Big Brother is a good boy,letting you take him down!!! A girl has to have some say in matters though!! As in new toys!!!

Love the ezine Helen, and yes it looks like spring!!

Your spring garden looks so lovely. The snow has been coming down since yesterday afternoon in mine and although it makes everything look like a fairyland, I prefer your hellebores this late in the season.
Very anxious for the March ezine to arrive. It has some wonderful projects, and did I see an article about organizing a fabric stash on you lovely cover? I was just mentioning to my husband that I needed to do just that! Very timely!
I think Ben’s a wonderful big brother…they’ve really bonded, haven’t they?
X Linda

Hi Linda, yes I think by now we’re all a bit tired of winter, but even if the weather isn’t great, at least the days are growing longer. Ben is great with Daisy, though he will certainly let her know if she oversteps the mark, which is a good thing really. He was so lonely after Amy died, but now Daisy doesn’t give him any time at all to mope! Thanks for your kind comments about the March issue, it’s been a lot of fun to get together, nice to get out all the pretty floral fabrics after the long dark winter. Xxx

Aw, ,they are so cute! We have a Golden Retriever who’s now 14 but still acts like a pup at times. Can’t beat our furry friends 🙂

Looking forward to the next issue – roll on Thursday …