YIPPEEEE!!  Stitches out – and now I am officially mobile again.  My knee still feels a bit stiff and sore, but so much better than it was.  I think any remaining tenderness is due to the operation and will disappear in time – as long as that naughty Miss Daisy doesn’t knock me over again, or I take a tumble on some of the incredibly slippery mud we seem to specialise in at this time of year.  I’ve bought myself a nice walking pole to help in the mud and have threatened her ladyship that if she’s bad I’ll poke her with the pointed end – not that she cares – not one little bit!  (she knows I’d never really do such a thing)

Our first walk together for nearly two weeks was around the woods, and during the first 10 minutes Daisy managed to (1) fall in the stream (2) become helplessly entangled in brambles and (3) cover herself and their friends’ mum in mud … 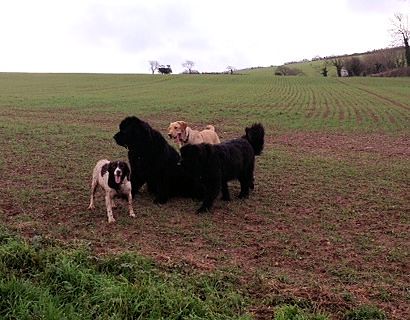 Teddy is a labrador who lurves Daisy (although he has been neutered) but Daisy only wants to play.  They’re both about the same age and there’s not too much difference in size (Daisy is a small newfie), so they have huge fun romping around while Ben and Rosie (the little springer spaniel) are a bit older and much more dignified!  At last the rain has stopped and the skies were blue with just a few puffy clouds … 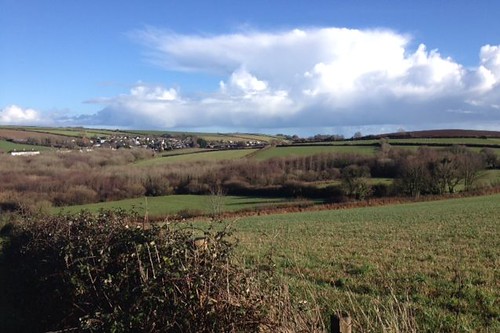 And I was delighted to see the hazel catkins lining the path along the sides of the woods…. 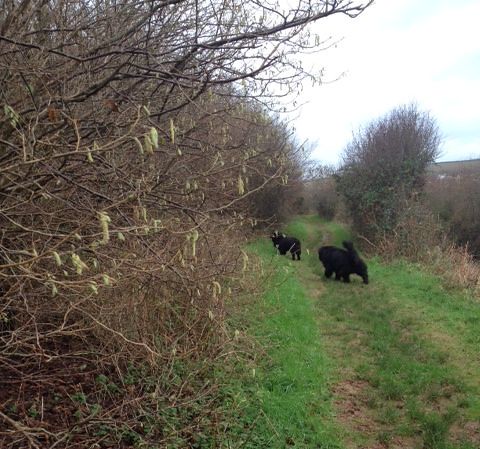 The days are slowly but steadily growing a little longer now – and whilst it’s still winter, there’s a definite feeling that spring is not too far around the corner – both inside and out!!  The baby daffodils on my table are just coming into bloom (though the ones outside are just fat green spikes) .. 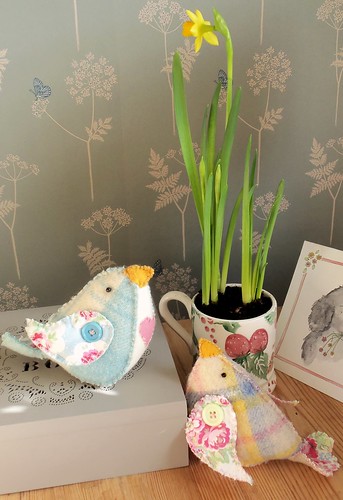 And love is in the air … the jackdaw family have returned and are busy laying claim to the nesting holes in the back of my house.  The February issue of the Bustle & Sew e-Magazine has a springlike feel too.  The pattern for the lovebirds (above) is included – a lovely make for Valentine’s day – as are these bunnies ….. 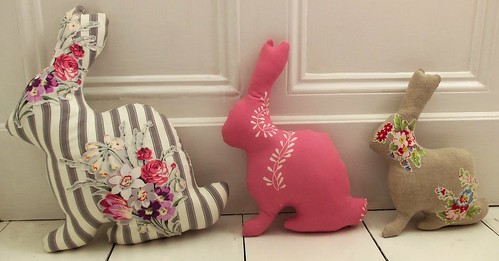 They’re part of my new series of articles “Making Money Making” – some help and advice for those wishing to make to sell over the coming months as the craft fair season gets underway again.  These bunnies would be a lovely easy make for any Easter Fairs – and I’ve some ideas for different things you can do with the basic bunny shape.  All this and much more will be in the February 2014 issue of the Bustle & Sew e-Magazine published on Thursday 30th.  If you’d like to learn more, then please just CLICK HERE. 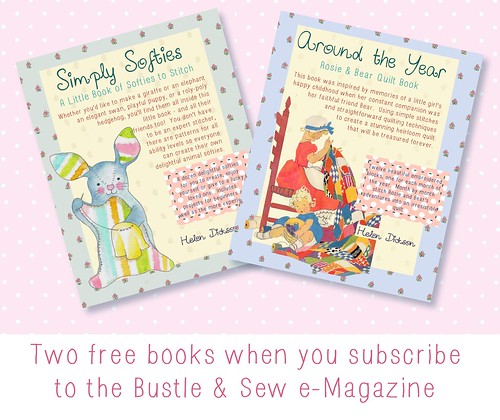 Glad to hear you are up and about. Cant wait to see more of those lovebirds!
Ang

I too have 2 large dogs. Isn’t it amazing how they can place themselves in the worst spot and that means you have to step-over them. Then just as you step they move and cause you to trip and go down. My Neo-mastiff loves to sleep in the doorway of whatever room I am in. I think it is her ‘protective nature’ that she was born with. Please be extra careful that you don’t fall. Falls can be serious.
p.s. I love your little birdies and the rabbits. They look so Spring.

Don’t over do it! I know what you mean about the mud at the moment, it’s lethal. We have a frost this morning which should harden things up a bit. I always love to see Ruby when she meets Boris, a white standard poodle, as they adore each other way more than they love their other doggy friends.

I am happy you are up and about again. Those puppers need you. The chicks and bunnies are really cute and I would love to make them for my grandchildren. You are very talented. Thanks.

So glad to hear that you’re doing well and have regained mobility, although limited. It’s also so nice to know that you’re experiencing the early signs of Spring. Thanks so much for sharing them! I’m anxiously awaiting the February ezine and have such lovely visions and happy thoughts of sweet birds and pastel bunnies as another ‘arctic vortex’ descends upon us here in the Northeastern USA and Spring seems so very far away!
XX Linda