Thank you so much to everyone who left kind supportive comments for Ben.  He hasn’t been out and about too much this week as it’s been far too hot for the Newfies.  We’ve been walking very early (5.30 am!) in the mornings when it’s cooler and both he and Daisy have been snoozing the rest of their days away in the shade of the summerhouse.  That is to say, I think they’re snoozing…. 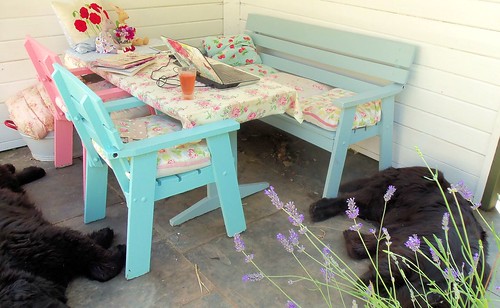 Though they would probably argue that they are simply supervising their human who’s hard at work.  I beg to differ …. 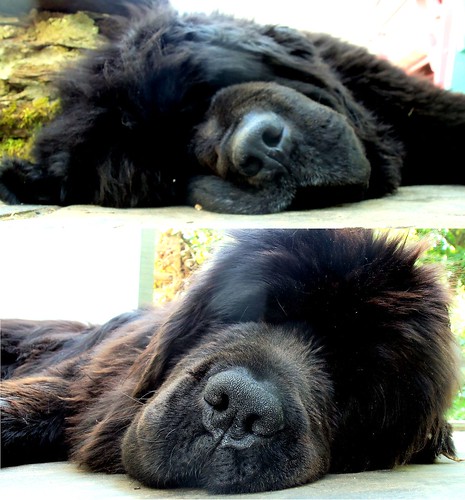 They look pretty snoozy (is there such a word?) to me!  And while they were slumbering I have been busy photographing this month’s projects for the Magazine . 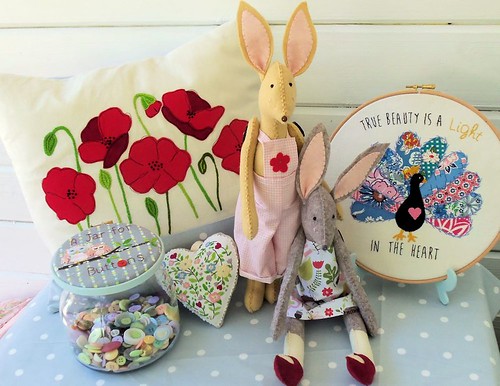 There’s my Jar for Buttons, Flanders Poppies Cushion, Embroidered Love heart, True Beauty Peacock and Emily & Arthur the two little bunnies.  And there’s lots more to enjoy too in the August issue – the full preview will be coming soon.

But – I’m really sorry – August is the last month you’ll be able to subscribe for the current price of $6.50, so if you had been considering subscribing, please don’t delay.  From the September issue the rate for new subscribers will be $7.50.  If you’re already a subscriber, then don’t worry – your existing rate will remain unchanged forever.

Just read all those lovely comments, they brought a tears to my eyes. We don’t have dogs, but get at 5.30am for the coolness, best time of day. We don’t do heat very well so will be joining Ben and Daisy for a little snoozy. Looking forward to the next magazine.
Julie xxxxxxx

Hi Helen, lovely projects again! Can’t wait for the next magazine,it will on time for me to get organised and take some projects with me on holiday. Hope you have a lovely summer too!

Thanks Petra – hope you have a lovely holiday xx

I love all the projects. Better start stitching soon! 🙂

All the projects look wonderful. I think the poppy pillow is my favorite. My granddaughters would love the rabbits and the stitched heart would be great hanging on a door knob. I love the puppers, sleeping guard dogs. Have a fun day Helen.

yep, they look snoozy to me too! I love all the projects, can’t wait for the newsletter. I don’t know which one I like more

Snoozing pups are just as sweet as sleeping kiddos! Hope Ben’s back to his happy self soon, poor fellow has been through alot.

They appear to be performing “quality control” inspections on your snoozing spots. 🙂 SOMEONE has to make sure they are comfortable. 🙂

Don’t they look very comfortable? This heat has made me feel like taking a snooze too. Love all those gorgeous makes Helen. At the moment I am hand stitching two taggy blankies for our youngest grandson, he already has one but won’t let it go long enough to be washed! One will be kept permanently in the caravan so it never gets forgotten again 🙂