First of all, thank you so much to everyone who said such lovely things about my newly redecorated kitchen – so very kind of you all.  Lots of people also wanted to know about my herb and spice jars…. 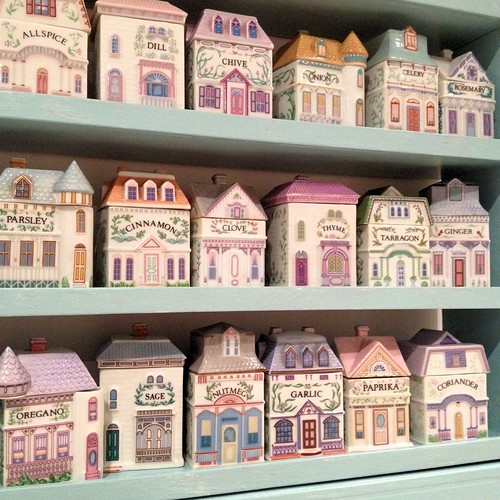 Now looking very smart on their newly repainted shelves.  I must admit that, until now, I didn’t know very much about them either as I inherited them a long time ago.  So I thought I’d do a bit of research … 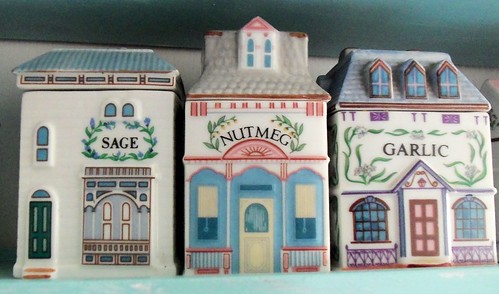 I have a set of 24 jars and I use most (although not all) of them.  They sit on their own shelves which were a sort of boring brown wood shade before I repainted them as part of my kitchen makeover.  After some googling around I was able to uncover that they were made by an American company – Lenox – in 1989 and are known as the Lenox Spice Village.  The shelf I painted (probably a terrible thing to do!) was the original display shelf, and as well as these little houses, just 3″ tall, there were various larger cannisters for flour, tea, sugar, cookies and so on.  A lovely touch, I think is that the insides of all the lids are labelled with the jar to which they belong – so you can be sure that after washing you always return the correct lid to each jar…. 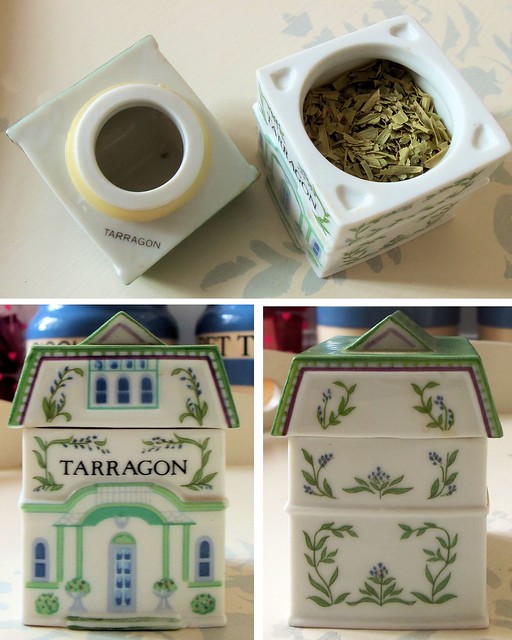 They are just as beautifully decorated on the back and sides as they are on the front.  They’re also easy to find on eBay – as I discovered when doing my googling.  Full sets only seemed to be available from the US,  but I discovered odd jars on eBay UK.  The full sets are between $100 – $150 on eBay including the shelves.

After all that googling and loving the Lenox village set, I thought that maybe my spice jars would be set off nicely with the addition of some of my own Village bunting….. 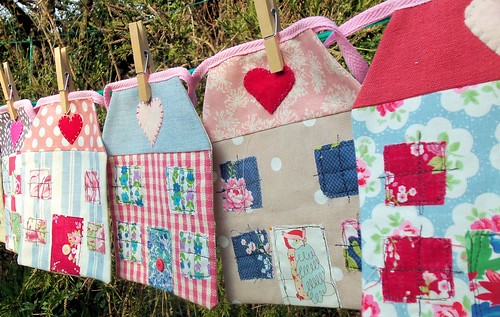 I’ve always found bunting to be one of the most difficult things to photograph.  First I tried in the garden – and after taking probably a couple of dozen photographs was only happy with this one.  So then I thought I’d try in the kitchen … 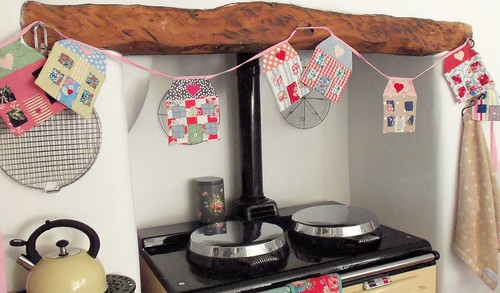 Better, but still lacking something.  Could that something perhaps be ….. 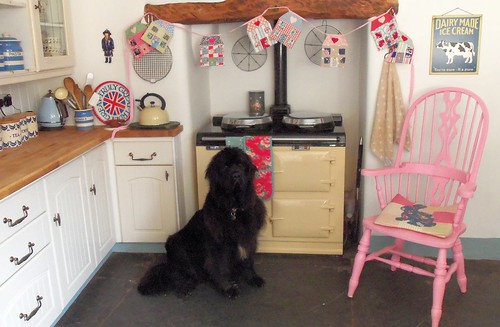 The prettiest (and naughtiest!) little newfie in Chillington?  Perfectly posed – thanks Daisy!

And if you’d like to make your own village bunting, the pattern will be in the April issue of the Bustle & Sew Magazine.

Pretty spice jars and the bunting goes well with them.

I adore your new kitchen, Helen! I had no idea your little houses were spice jars! From afar in the photos I thought they were the little wooden houses/villages people collect! So thank you especially for sharing this! Oh my goodness I love them! Just may have to get them too! Wowee. Yes, and Lenox is a huge China and pottery company in the US. A lot of people (women) collect Lenox China dishes, especially when they get married! There’s a website in the US called replacements.com which might carry them as well. I’ll have to check it out, thank YOU! P.S. Love your models too!

How cute the little herb and spice houses are! The bunting is a very darling accent to your kitchen. And Daisy makes it more wonderful. Thanks for sharing!

The spice jars are gorgeous. Love the bunting too.
Daisy is lovely as always
Julie xxxxxxxxx

I just love your kitchen and will definitely be putting the Lenox jars on my wish list. I’ve been shopping recently for a spice rack after discovering that my spices all seem to disappear once they enter my cupboards. And I’m certain that I’ll never find a prettier one! I also love the bunting and will look forward to that pattern. Daisy is lovely, wherever she happens to be, but looks especially nice in her excellent pose!
X Linda

Hi Helen,
Just to say I really like your newly decorated kitchen – it’ll look great for THE wedding! I can’t wait for the April isue of B&S to come out – so many exciting things to look forard to. After seeing the recent photo of Ben and Daisy beside your sofa with the lovely crochet blanket on, I just had to go and buy some wool and make my own! So far this weekend I have made 7 x 8″ blocks and will keep going until it’s a good size. Well done, Ben and Daisy – thanks for the inspiration. (I shan’t show their photo to our two German Shepherd girls or they will have ideas of sitting on my crochet blanket when it’s finished!)
Love,
Diana.

Thanks Diana – good luck with the blanket – Rosie is the crochet queen in our family! xx