At last I think it’s safe to say that summer has arrived here in our little corner of Somerset.  Having spent most of the day sprawled in the coolest corners they can find, the newfies are relishing the cool breeze that sprung up just a little while ago.  I  have to be very careful of Ben now as his laryngeal paralysis means that he finds it hard to pant properly and so is at particular risk of overheating.  I think I’ll have to take them both swimming again to help them cool down properly very soon as there are lots of lovely places to take them close by – not just rivers and streams, but lakes too! 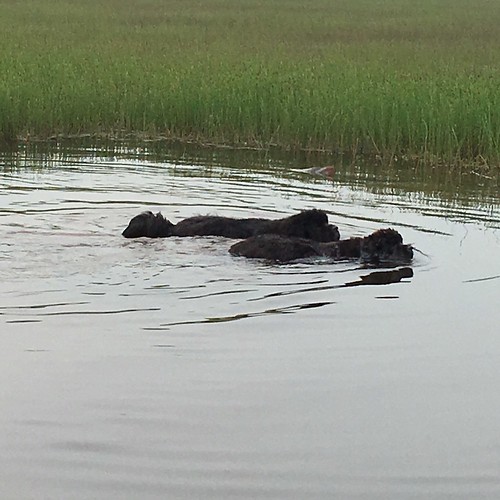 And no waves for Ben to worry about either – he’s never liked waves since a rather unfortunate incident when he was a pup – but that’s a story for another time perhaps.  Although I do miss the sea, it’s nicer for them to swim in fresh water as I don’t have to worry about washing out all the salt from their coats when we get home.  The newfies certainly wouldn’t be allowed to swim in the moat or pools at Wells Bishop’s Palace where I took Freddie on Tuesday …..

The swans hatched eight cygnets this year, and seven still survive which I think is quite a success story.  And I do love the children’s play area at the Bishop’s Palace too – check out that scary looking dragon!  Freddie has yet to venture into the dragon’s lair, but I think it’s only a matter of time!  In between all these outings I have managed to fit in some time for sewing, and have completed and photographed the first three projects for the July Bustle & Sew Magazine. There’s a bit of a seaside/coastal theme to this month’s issue… A ship in a bottle … with a little silver anchor and chain.  This is worked all in back stitch.  I was inspired by Megan of Studio MME ‘s ethos of beauty in simplicity  (Megan is one of the Makers featured in the current issue of the Bustle & Sew Magazine) to create a really easy project that could potentially be sewing in a day – or perhaps two – rather than a week.  Then, because no trip to the seaside is complete without ice cream, and a big boxy bag is essential to take to the beach, we have the Ice Cream Beach Bag ….. Featuring all my favourite varieties! And three little hand embroidered iron on patches – perfect for giving your jacket or bag that casual summer feeling.  I originally had sailor’s tattoos in mind, but the patches didn’t quite work out that way ….. They were great fun to stitch though and I hope you like them too!

And finally, we’ve started sending out Wilderness Bear kits already, but we still have plenty in stock.  I’ve been getting a bit ahead of myself with sewing, and in the August Magazine, the Wilderness Bear will be joined by a little friend who loves to hop, skip and dance! The Ballerina Bunny pattern won’t be available for a few weeks yet, but in the meantime, we still have plenty of Wilderness Bear kits available at our special introductory price.  This offer will finish on Sunday though, so please don’t delay ordering if you want to take advantage.

Hello,
I am new here. The lovely ice cream bag, is the pattern in this month’s magazine? If not could you tell me how to purchase the pattern?
Thank you, Kim

Hi Kim, Nice to meet you! So pleased you like the bag, yes the pattern will be in the July issue out at the end of the month. xx