I think I may have mentioned before that my first love is hand embroidery.  I began  at a very early age, learning from both my mum and my grandmother using large crewel needles and brightly coloured flosses for my first rather wonky stitches. I find stitching so relaxing, almost always having a project on the go in my hoop though I am in total awe of the stitchers from times gone past, loving the look look of old monogrammed linens, with their tiny stitches and beautiful curved shapes, sometimes enhanced with small floral decorations as well as curls and swirls in the letters themselves, sometimes so ornate you can hardly make out the actual letters.  This month I decided to upsize this idea, so have spent quite a lot of time playing with ideas for a large floral alphabet, around 5″ high…. 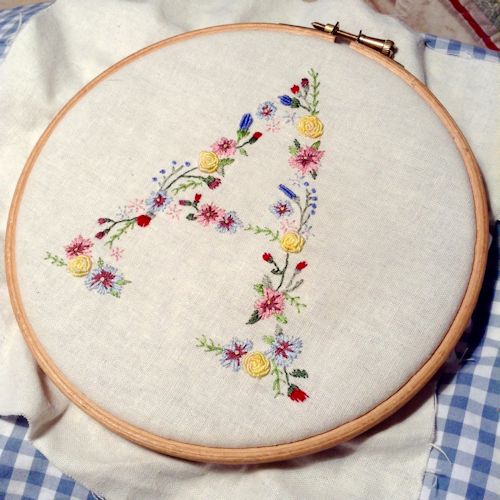 Here’s the A in my 7″ hoop and I think a letter mounted in this way would make a lovely gift for some lucky recipient. I’m drawing the whole alphabet so even if you’re not stitching for  Alice, Agnes or Amanda you’ll still be able to embroider your initial.  But as well as the actual pattern itself, I like to think of how the finished work could be used in different ways……. 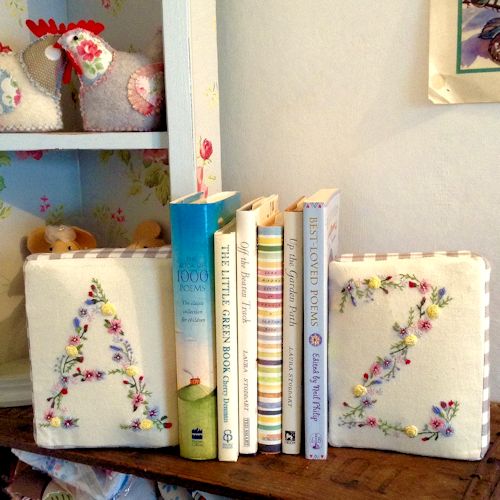 Like bookends!  Stitched into simple blocks using gingham as a nice contrast to the floral embroidery and, to be honest, using gingham was also really useful to help me cut my pieces accurately(!)   The blocks themselves are sewn by machine and filled with a mixture of toy stuffing and (as it was all I had to hand) pearl barley for weight.  I think they’ll be a very useful addition to my shelves.

The patterns for all 26 letters, together with an ampersand in case you want to stitch initials for a couple perhaps, will be in the November issue of the Bustle & Sew Magazine in two weeks time. Hope you like them!

Absolutely beautiful Helen, how did you do the roses?
Lynn x

Thanks so much Lynn – they’re bullion stitch. Will include stitching details with the patterns xx

Your letters are so beautiful….and using them as bookends is such a wonderful idea!
XX Linda

Wow! That is amaZing embrodiery! So beautiful!

Embroidering initials is a lovely idea and how clever to make them into bookends. There are only so many book covers we need, though I did think they would make a lovely wedding album cover, perhaps for a new bride and groom or a very special wedding anniversary?
I am going to be a spanking new Grandma in March for the very first time (so excited) and thought an initial in pastel shades for a baby album could work, though I don’t know pink or blue yet!
So enjoy your magazine.
Kind regards, Sue Thomas

I love these, your embroidery is so beautiful. I think I will try this and if it’s successful (I’m not very good ) I would love to embroider this on a white blouse/tunic. I find using a 7″ hoop quite awkward, I usually use a 4″ and move the hoop around the design, maybe it’s time to persevere with the bigger hoop LOL
Kathleen xx

I prefer not to move my hoop over the design for fear of squashing my stitches, so like to go as big as possible xx

I do worry about that, but so far, it’s been fine. After I’m finished I slacked off the hoop, well if I remember. 😉 xx

Oh these are so beautiful!!

They are beautiful. Wow, what bargain in the November issue. My mother is in a retirement home and she would love a framed D. Lovely. Thank you.

Aw, thanks Chris, what a lucky mother she will be! xx