Once upon a time there were six little bunnies.  They were all made out of vintage blanket by Ellie who had taken great care in embroidering their little black eyes, their beautiful long brown whiskers and the lovely colourful flowers on their plump little bodies.  But they were most proud of their beautiful fluffy tails which were as soft as soft could be. 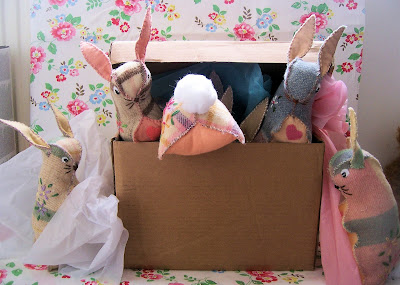 Now these six little bunnies had all been sold to a very nice lady who wanted them for her shop in Bath so Ellie had found a nice strong box for them to travel in and some very pretty tissue paper to wrap them so they would be comfortable on their long journey.  But … these were very naughty bunnies.  Although Ellie had taken great care to make them comfortable they did not want to stay in their box …. they wanted to explore. 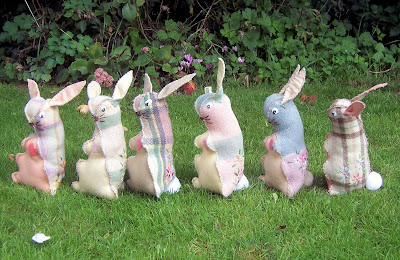 So when Ellie wasn’t watching they climbed out of their nice strong box, squeezed through the open workshop door and headed off across the garden. Over the grass… down the steps… and soon they came to the log store.  Because they were very naughty bunnies who didn’t care that they might spoil their lovely fluffy tails they climbed up the apple crates and sat on top of Ben’s blanket shouting rude words at the thrush who lives in the old apple tree.  But soon they became bored with this …. 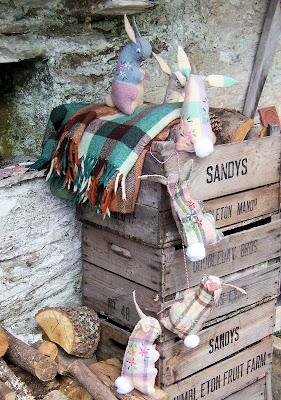 .. and marched along the top of the garden wall  pushing and shoving to see if anyone might fall off.  Luckily none of them did, because down below, snoozing by the back door was a BIG BLACK MONSTER!! 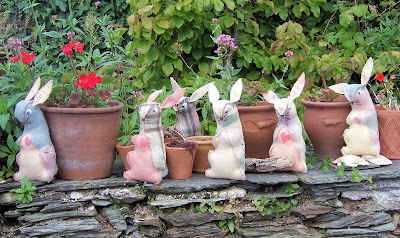 First the bravest bunny crept over to take a look.  But the monster didn’t move, just lay there making gentle snuffling and snoring noises.  He was fast asleep.  Soon all the bunnies had come to take a look at the monster.  Then the naughtiest prodded him with a furry paw.  One eye opened …. then the monster opened his mouth to reveal a long pink tongue and a whole set of strong white teeth… so … as one…. 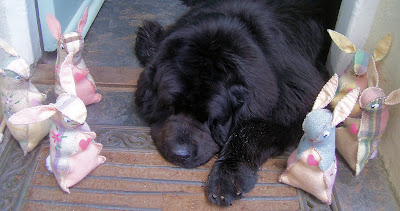 … the bunnies turned round and ran as fast as their short little legs would carry them … up the stairs, over the grass.. through the workroom door and back into their nice comfortable box.. 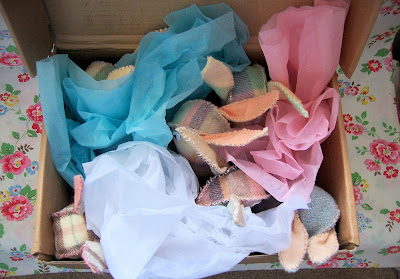 Which is where I found them when I returned to the workroom with a nice hot cup of coffee!!
THE END
PS Bunny pattern available on Bustle and Sew  and finished bunnies in my Etsy shop

Thank you for such a cute story to start my day.

oh this post is fantastic and the story's heroes are adorable!!!

hehe they are so lovely 🙂

Cute. I enjoyed reading your post and admire your creations.

There definitely is not too much cute when it comes to bunnies. This post just proves it!