I haven’t posted very much this week but this is not because I have been on holiday – far from it!  No, I am having one of those times when, whichever way I look, there is a project calling “Me! Me! Work on me today!”  And I have given in.  Ignored my computer, turning instead to needle and thread.  Last week’s weather made snuggling by the fire very appealing – strong winds and rain every day.  Near us, on the road to Totnes that runs near East Allington, there is one particular tree shaped by just this sort of wild autumn weather …. 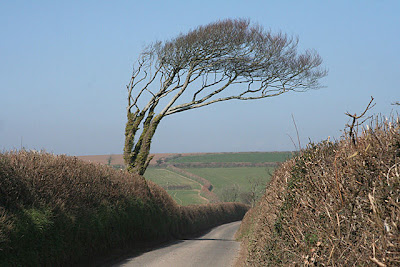 …  sculpted by the fierce westerly winds that sweep in from the Atlantic across our part of Devon, bringing the mist and rain that so often blankets the moors above us.  This photo was taken on a perfectly still day and you can see how the tree has become stunted and distorted by the force of the gales.  It is the most amazing shape, and it inspired my new embroidery project: 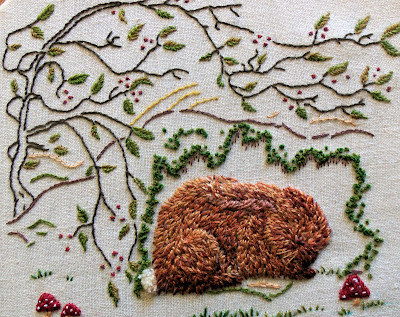 A small bunny safe and snug in his burrow whilst the autumn gales sweep across the Devon countryside above his head.  The embroidery is finished, but there is still more work to do as I am going to frame him in a patchwork border before mounting him to hang.  I don’t know if you can see from the picture below, but he is a stumpwork bunny …. 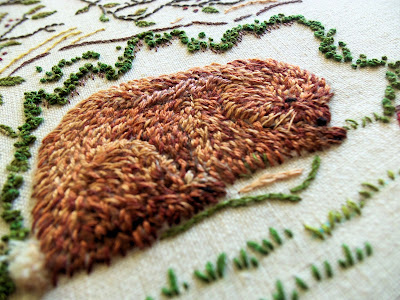 I used simple felt shapes stitched into place to give his body nice rounded contours.  The book I read on techniques suggested animal hair was best for stuffing beneath felt, but although Ben would have been happy to oblige, I declined.  I have been wanting to try stumpwork for a while now, and my bunny turned out to be really easy and great fun to stitch.  You can just make out his fluffy tail in the bottom corner. 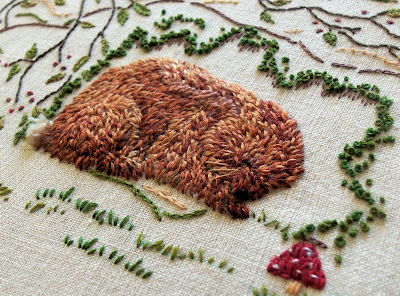 And his eyes are squeezed tightly shut.  Not too many French knots!  The pattern, with fully illustrated guide for working will be included in January’s magazine which will be published on Thursday 29th December.  Don’t forget – the magazine price will rise in January, so if you were considering taking out a subscription, then don’t delay – it’s still only $4.50 each month.  You can find out more here.
I’ll be back later this week with news of another of last week’s projects – this time a great free pattern for  newsletter readers. Would you like a sneak preview?  Yes? No?  Oh … go on then … 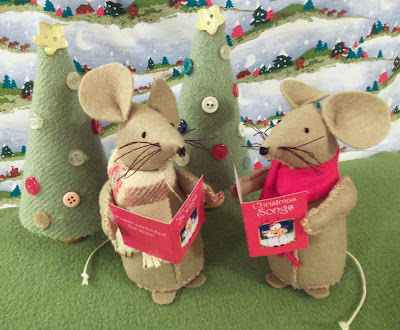 Oh I love those little mice!! So cute.

I love your little bunny. He is so sweet. The mice are cute too.

What a sweet bunny.
Love the Carol Singing mice too.
Carol xx

It's wonderful how nature can inspire! Love your little mice! Hope all is well 😉

That little bunny is so sweet!! 🙂
Vivienne x

Your little bunny is so beautifully stitched and looks so snuggly all cuddled-up and asleep. Can't wait for the January issue and the pattern as I've never tried stumpwork. This little snuggle-bunny is all the incentive I need! Will make a lovely relaxing project for post-Christmas activities! And the Carol-Singing mice, Helen, are precious!Right down to their fringed scarfs!
X Linda

That is absolutely gorgeous! You have really captured the rabbit fur and the wind in the tree is so graceful. Just lovely thank you for sharing.xx

How lovely to see what inspired your beautiful embroidery. The little bunny is gorgeous, so fluffy, but I've no idea how you made him:)

I spotted the little bunny in my reader and fell in love, and now you say I'll be getting the pattern in the magazine in January!! Thank you so much, I can't wait!!