While I was away in Dubai having a wonderful time, Ben and Daisy went off to stay in their favourite kennels, where as usual, they ran straight inside waving their tails with pleasure, hardly even stopping to say farewell.  And it’s true that I hardly gave them a thought while I was away, knowing that they were safe and happy with their “Auntie Gillian.”  I went up the Burj Khalifa (the world’s tallest building), drove through the Arabian desert in a fleet of 4 x 4’s and even had a henna tattoo (strictly temporary!)  I had a wonderful time ….

But the day after I returned when I went to collect my two furry friends, I was greeted by a very sober Gillian who told me Ben had been so very ill she ‘d had to call the emergency vet because she was worried she might lose him.

He wouldn’t move, not even the slightest wag of his tail, and hardly reacted to anything at all.  So blood tests were taken, medication administered and much love given.  She didn’t call me as there would have been absolutely nothing I could have done from so very far away.  Luckily with all the care and attention he received he’s now pretty much made a full recovery.  The feeling is that he must have picked up and eaten something very bad indeed – as Daisy was absolutely fine.  Poor Ben –  after his experience with the stones you’d think he would have learned not to eat stuff – but then although he’s much loved, and (in his opinion at least!) very strong and brave – he really isn’t the cleverest of dogs! 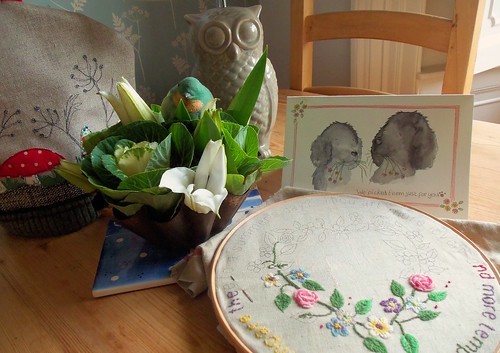 I’ve been keeping a very close eye on him for the last few days, whilst finishing off my final project for the January 2014 Magazine…. 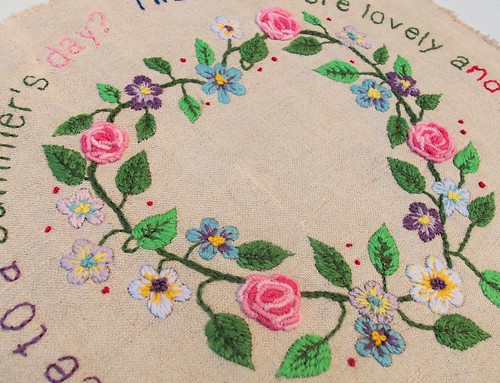 A crewel love heart – beautiful spring and summer blossoms encircled by a very famous quotation from one of Shakespeare’s sonnets “Shall I compare thee to a summer’s day?”   Summer seems a long way off for us, but it is after all summer in the southern hemisphere – and I did have a little taste of summer in Dubai!  But I won’t be heading off on holiday again and leaving Ben behind for a while – I don’t know how Daisy and I would manage without him.  I know that one day he won’t be here any more …. but not for a long time yet I hope.  Just DON’T EAT ANYTHING when you’re out and about Master Benjamin!!

Poor Ben, I hope he’s recovered in time to get his share of Christmas treats. We always know that Ruby’s fate is in the lap of the gods at the best of times, and always tell the friends that we leave her with that what will be will be, knowing that they’ll take as great care of her as we do, but accidents can happen. Best wishes for a wonderful Christmas.

Good Heavens! I am SO glad that Ben recovered. I visited Dubai a few years ago and had some of the same experiences-sand dune surfing and barbecue in the desert and henna tattoo on my hand and lower arm. I did not get to go into the Burj Khalifa-it wasn’t finished enough for visitors-but did get to visit the Burj Al Arab-the hotel that looks like a sail. It was a guided tour with breakfast. It was a very interesting visit!

Oh no, so sorry. My hound has been ill a couple times from possibly something he ate! Once, my hound may have eaten a frog or toad whose skins are very poisonous. Just a few weeks ago, he got into some chocolate which made him sick and can be very lethal to dogs. My pup has to taste everything on our walks. Ugh.

So happy Ben is on the mend, poor baby. How is Daisy reacting to it?

Well you just can’t go anywhere, can you!? What an unpleasant surprise to arrive home to. Ben IS very strong and brave, but his digestion, maybe not quite so much. So glad to know that the big guy is feeling better. Daisy, learn from your big brother’s experience! 🙂

Poor baby. Give him a Texas sized hug from me. Daisy, too. Our Chihuahua is in Renal Failure, and is not doing well. I am so glad that Ben is doing so much better.

So sorry Deborah, all our thoughts are with you x

So glad your dog is recovering, as a dog lover myself I feel for you. My girl ‘Ruby’ ate the wrapping paper yesterday…. no repercussions thankfully !
Merry Christmas, Frances

Oh Helen so sorry that Big Ben got so sick, but I am glad he is on the mend!! Big hugs and ear rubs!!
Blessings, Jan

Oh Helen, to enjoy just a lovely holiday then come back to discover Ben had been so very ill must have been extreme. But I agree with the kennels, it was best not to contact you, really all that would have done is worry you beyond believe. Thankfully he’s fine and you can breathe a sigh of relief. Enjoy Christmas with friends, human and furry and give loads of cuddles to Ben. Happy Christmas xx

So glad to hear Mr. Ben is better. Hugs and kisses for babies…Ben and Daisy.