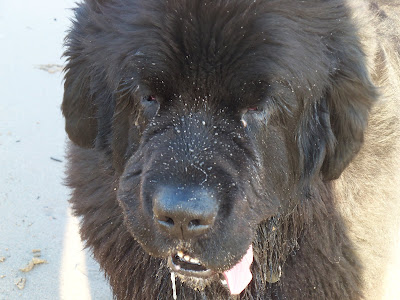 I was very much hoping to be able to tell you today that I had finished my Rosie & Bear Calendar Quilt.  I sat down yesterday with cup of tea and audio book and soon became totally absorbed, both by my sewing and the rather exciting murder mystery plot I was listening to.  But … while I was happily occupied .. someone was feeling rather bored and neglected and was plotting his revenge.
After about an hour I decided to head downstairs to put the kettle on for more tea.  I was going to give Ben a doggie choc for being such a good quiet boy.  But he did not receive his doggie choc. This was because I was totally horrified by the sight that met me as I descended the stairs.  Ben had clearly decided that his beautifully made bed – a waterproof (for those swimming days) mattress topped by two freshly washed  old woollen blankets – no longer met his requirements.  The blankets had been pulled off the bed, and tossed around the hall where his bed is and now looked rumpled and scrumpled and decidedly grubby again.
That in itself was not so bad.  BUT … Rosie gave him a lovely grey teddy with a squeaker and red Santa hat for Christmas.  That teddy had died while I was sewing.  It appeared as though there had been a snowstorm in the hall – fluffy filling was EVERYWHERE, whilst a few rags of grey fur and a sad tattered hat lurked in the corner.  I have not yet discovered the pom pom off the top of the bear’s Santa hat and can only assume it has been EATEN.  By the time I had finished telling Ben off (he didn’t care) and had cleared up I didn’t feel like sewing any more, so my quilt is not quite finished. 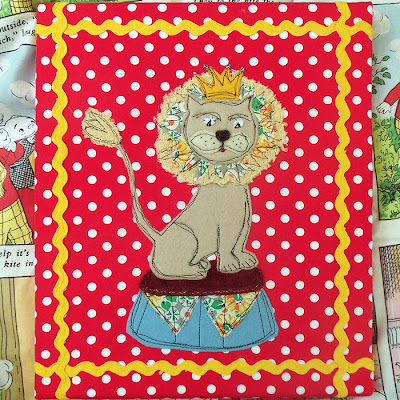 But I have finished revising and updating my Circus Lion machine applique tutorial.  I’ve been using this really effective and fun technique a lot lately, one of the patterns for this month’s magazine, the China Cats   cushion cover, incorporates machine applique.  So I’ve added additional hints and tips as well as additional pictures to the pattern-based tutorial.  I’ll be sending it out to my free newsletter readers at the weekend, so if you’d like it and you’re not a subscriber, then please do sign up to my free newsletter and it will be heading towards your in-box very soon.

Don't worry Ben she loves you really and she wouldn't be without you, but that was naughty of you to destroy your Teddy – so where has the pom-pom gone…….?
Julie xxxxxxx

Ahhh, Ben, I loves ya!!!!! Guess you were bored. Too funny, thanks for the laugh.

Oh Ben poor you, you must have been very bored lol but she loves you really. I hope the missing pom pom doesn't give you any problems

Oh Ben, hope you don't have any trouble with that pom pom. We once had a poodle who was partial to yellow dusters………. used to produce some very bright (almost ready wrapped!) parcels.
Carol xx

how can you tell that beautiful face off? its your fault mum for leaving him to get up to mischeif.our bassett hound benny use to eat the eyes and noses off his toys,

TO: Ben
FROM: Kip aka "The Shredder"
Way to go buddy! I think you'll agree, there is nothing more fun than tearing something apart!! BTW pom pom's are most delicious don't you think? I'm not sure what's wrong with humans but they just don't know a delicacy when they see/smell/taste one!
TO: Helen
FROM: Laura
I totally feel your pain! :-S

Well, I must admit to a real sense of relief as I read through this. At first I was really worried that Ben might have eaten your new calendar quilt! So what's a teddy, and a pom-pom compared to that!

Woof! Woof, Ben! This is Gabe, your across the big pond brother Newfie. Way to go, buddy! Nothing better than shredding a stuffie for some fun play. I never understand why my two-legged furless momma gets upset with me either when I do that. A word of advice though…do not eat the squeaker. Those can be tricky to "dispense" after you eat them (if you know what I mean.) But I understand your thrill of the hunt and capture and destruction of the softie toy. My sister and baby brother Newfies are not as keen about this kind of play as I am so I just do it all for them. And buddy…don't worry…your momma will forgive you soon enough. Give her your "I'm sorry" eyes. Gets 'em everytime.

Woofs and slobbers from your bro,
Gabe

Aaw poor Ben. My dogs always take the squeakies out of their soft toys and pull the stuffing out I think that it is something in their genes.

I am just finishing an audiobook and would be interested in a recommendation.

I have a 7 month old puppy and when I think he's been really good and quiet he's always been up to no good, I decided he needed a Cath Kidston dog bed ( I know I know, what was I thinking ) he still has it but every morning there is a bit of a snow storm as more stuffing is removed, I'm really sorry about the teddy but I did have to giggle as it has become apparent that this is the sort of things dogs do and mine isn't doing anything different or unusual, just wish I'd realised that before I wasted £50 on a bed : )
Emma x

Naughty Ben. My dog frequently rips his bed up and pulls all the stuffing out and I don't bother giving him teddies any more as they last about 5 mins. I've given up telling him off as it doesn't seem to make any difference. Reading the comments above this seems to be common doggie behaviour, I think it's their way of protesting when the attention is not on them. Oh how we love them anyway 🙂 Hannah x