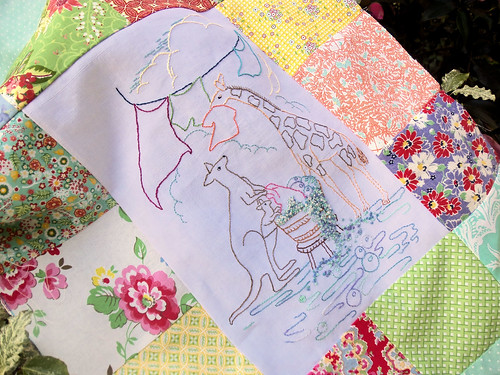 Newsletter subscribers may recall that in last week’s issue I mentioned my new Laundry Bag design that’s coming to the April issue of the Magazine.  I’ve now completed the front – it’s framed with some simple patchwork and shows a mother kangraroo doing the family laundry with a little help from a friendly giraffe.  He appeared as I’ve been doing a lot of research on animals for my Diamond Jubilee Quilt project (that’s my free part-work for magazine subscribers). Although he won’t be appearing in any of the blocks I loved him too much to discard him entirely.   He was a candidate for the Kenya block, but I decided to use my tree house idea instead … 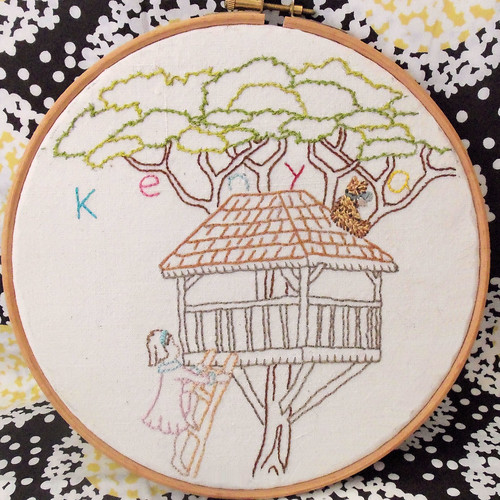 It was during her state visit to Kenya in 1952 that Princess Elizabeth learned of the death of her father, King George VI and that she had become Queen. Princess Elizabeth was staying at Treetops Hotel (a very grand tree house indeed!) in a remote part of the country at the time of her father’s death and flew back to Britain immediately on hearing the news. Her Royal Highness was proclaimed Queen Elizabeth II two days later on 8 February 1952 and crowned the following year.

In my block the naughty pair are re-visiting that historic moment in their own unique style – I am sure that Rosie is calling “Hold on tight Bear – I’m coming to save you!!”  And here, with his own unique style is Ben! 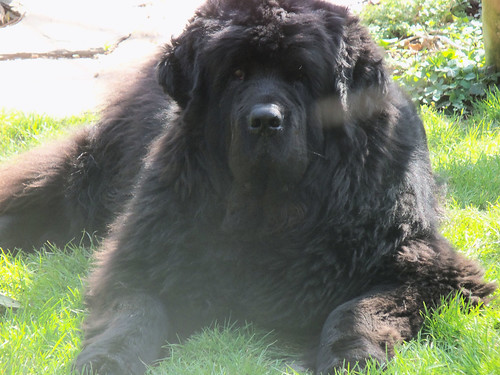 I just had to share this photo with you – he was clearly quite disgusted with my actions yesterday in filling in his hole and re-planting my primroses. So he was keeping a very close watch to make sure that I really was only taking photographs and wasn’t trying to locate any more of his hidden treasures!

I think that’s what’s known as giving someone a  black look!!

I love the new laundry bag! Such a cute pair ! And speaking of cute….Beautiful Ben is lovely….even when giving a “black look”. (Probably equally disgusted to have the mud removed from his nose!)
X Linda

Just love this laundry bag and the kangaroo is just too cute!L7HC

I love your photos of Ben. I grew up with Newfies, I think they may be the most expressive of any breed and so lovable.

I’m so happy to have found your website and blog. Your embroidery and applique patterns have a kind of sweetness that is rare these days. I know that I’ll spend many happy hours at work with needle and thread, Rosie and Bear. I am enjoying your writings about big, wonderful Ben. We share our home with four lovable fur babies…small, mixed breed rescues. They fill our hearts and home with love, chewed pine cones, sticks and bits…and occasionally… mud. I can’t imagine a life without dogs. Each is a treasure.
…..and now to stitch.
Irene