Today is the end of the Christmas holidays for our local schools, and it’s also the night before the Feast of Epiphany, the day that the Nativity story tells us the Three Kings, or Wise Men, visited the Baby Jesus bringing their gifts of gold, frankincense and myrrh.  Tomorrow is the day that we take our Christmas decorations down (sob!) regarding it as our Twelfth Night.  But there is some confusion about Twelfth Night and I only recently discovered that it’s because in centuries past, Christmas was deemed to start at sunset on December 24th and so the 12th night following it was January 5th.  Today we tend to count from Christmas Day itself, so assume that Twelfth Night falls on the 6th. 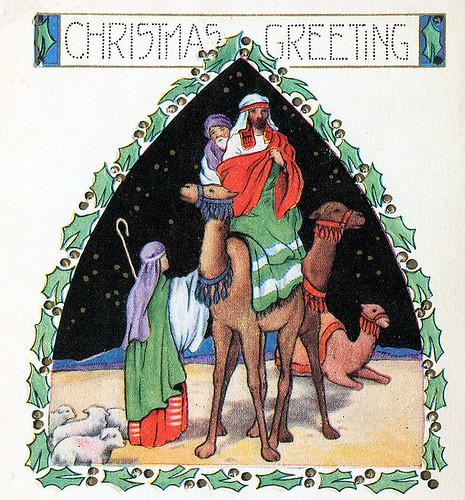 But whenever Twelfth Night actually is, today is definitely the ultimate, final day of the Christmas period for us here at Coombe Leigh.  This afternoon has been wet and windy (again!) so it was a great opportunity to pack all my decorations away for another year, just a little early, saying a sad farewell to the Angel Pigs, Baby Reindeer and Carol Singing Mice, as well as all the Christmas tree baubles collected over the years – carefully packed in tissue paper to protect against breakages.   Now that Christmas is over, the countdown to Rosie and Dan’s wedding is properly underway and inspired by the air of romance I’ve just finished my first design for the February 2014 issue of the Bustle & Sew e-Magazine …. 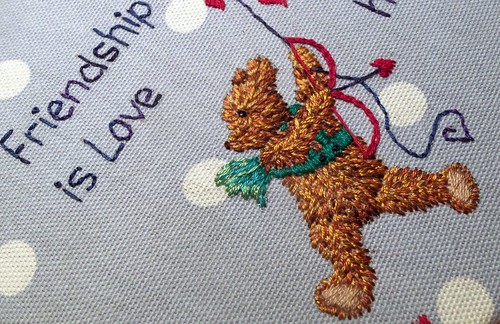 A little Cupid Bear – who’s not terribly confident that his buttoned-on wings will support his rather tubby body so is relying on his large balloon to keep him airborne! 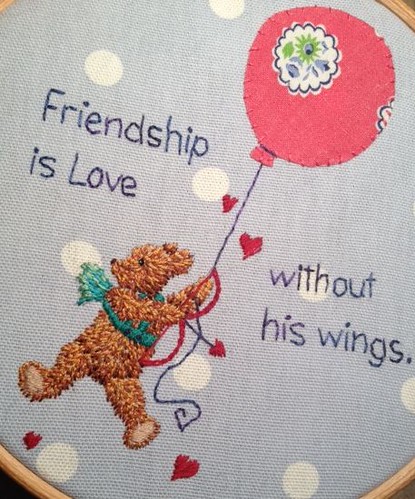 The quote I’ve chosen (though it would be very easy to print and stitch your own text or message) is from Lord Byron, the 19th century poet famously described as “mad, bad and dangerous to know!” (a bit like Daisy in one of her mischievous moods!).  But I have a soft spot for Byron – he was a great animal lover and devoted to his Newfoundland dog, Boatswain.  When Boatswain died Byron composed and had engraved on his tomb the following epitaph….

Near this Spot
are deposited the Remains of one
who possessed Beauty without Vanity,
Strength without Insolence,
Courage without Ferosity,
and all the virtues of Man without his Vices.

This praise, which would be unmeaning Flattery
if inscribed over human Ashes,
is but a just tribute to the Memory of
BOATSWAIN, a DOG,
who was born in Newfoundland May 1803
and died at Newstead Nov. 18, 1808

Someone who loved his dog so much surely can’t have been all bad?  And so I chose Byron’s quote for my little Cupid Bear …. 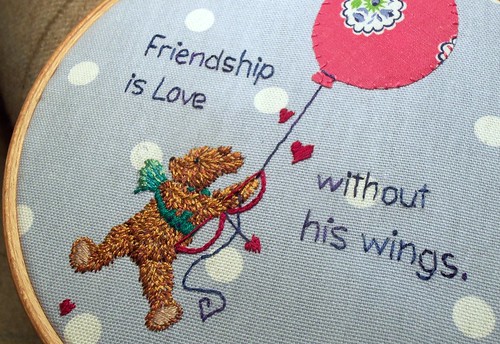 Like him? I adore him! Oh, how I have missed your little bears…and didn’t even realize!
X Linda

Aw, thanks so much Linda. Think I was a bit “beared-out” but will try to do better this year! xx

What a lovely quote.
Julie xxxxx

I’m glad you’re feeling a bit better. I hope all goes well and you’re good as new soon.
I love receiving your newsletters. Even though I rarely get a chance to stitch, I find you’re newsletters a lovely distraction from a hectic world: a window into a rather magical place – like Wonderland.