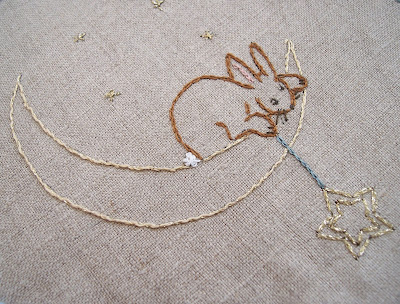 In England, we all know to look for the old man in the moon on clear moonlit nights.  But other cultures see different images in the shadows on the face of the moon.  The Japanese and other Far Eastern countries have the lovely legend of the Moon Rabbit – which inspired my design.

Here is the legend – in case you’re not familiar with it  ….

“Once upon a time long ago, a monkey, a rabbit, and a fox were good friends.  During the day they played together and at night they slept in the forest.  The Lord of Heaven heard about the three friends and wanted to see if such a thing could really be true. He went to them disguised as a poor old man.  “I have travelled through mountains and valleys and I am hungry and tired. Could you give me something to eat?” he, asked laying down his staff in order to rest.
The monkey went off at once to gather nuts from the trees and bushes; the fox brought a plump fish from his trap in the river. The rabbit ran through the fields in every direction but could find nothing  suitable  to bring the hungry man.  So he asked the monkey to gather some dried leaves and twigs and the fox to set fire to them. They did so. Then the little rabbit said to the elderly man, “Please eat me as I have nothing else to give you” and threw himself into the flames. 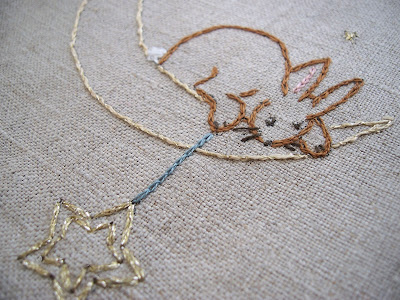 The pilgrim was moved by the rabbit’s sacrifice, and wept, saying, “Each one deserves praise; there are neither winners nor losers. But the little rabbit has given an exceptional proof of love.” So saying, he restored the rabbit to his original form and took the little body to heaven to be buried in the palace of the moon, where the rabbit may be seen to this day.”
My Moon Rabbit is a very simple design – worked in outline only – a mix of chain and stem stitch with a few French knots for his tail.  The moon is stem stitch in cream floss whipped with gold.  I hope you like him – 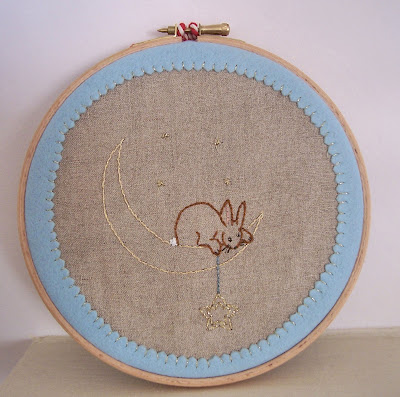 It's a lovely, charming design. Thank you!

Oh that is cute!

Thank you! This will be my next project. I love how you framed it in the blue. And, I had never heard that legend. Thank you for that as well.

This is so lovely and sweet. Thank you!

That is really beautiful. Thankyou!

That is so lovely!

Such a cute pattern; thank you for sharing it and the story behind it.

I love how you trimmed it with the blue fabric.

Just a quick note to let you know that a link to this post will be placed on CraftCrave today [09 Dec 01:00am GMT]. Thanks, Maria

This is so cute. I must find a way to incorporate this pattern into a baby quilt ♥

so sweet! and i can't wait to share the story at my preschool. thanks once again for he freebies! xx

Thank you so very much! The legend is so touching and as always, your embroidery is beautiful. I deeply appreciate how much you share with us.

Oh my goodness, this is the cutest thing EVER! This would look adorable on a nightgown or sleep shirt!
Thanks so much! It is really sweet!

I just linked to this entry on my blog today. (http://katydiddys.blogspot.com/2011/02/chinese-new-year-year-of-rabbit.html) Thanks for the wonderful pattern!