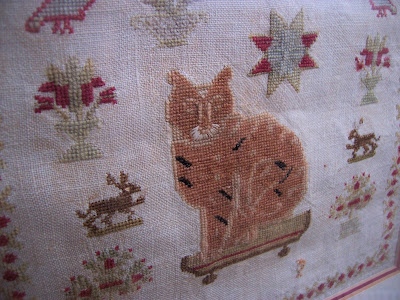 I think I have probably mentioned before that I come from a long line of accomplished needlewomen.  I certainly would not place myself in that category … and the above is one of the reasons why…..  This embroidery and its mirror twin are two of my most treasured possessions.  They were worked by my grandmother’s grandmother in the early to mid-19th century.  Her name was Mary Parker and when she completed these she was only nine years old.  Yes – nine years old.  Amazing! 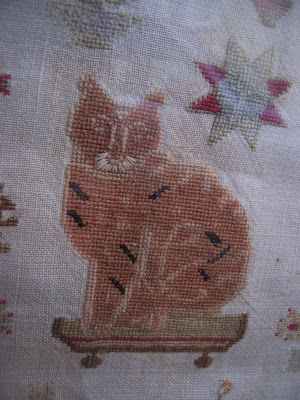 Look at the beautiful stitching!  It’s hard to see properly in these photos because I keep them behind glass – but each stitch is a tiny tiny cross stitch no bigger than a pinhead.  And I adore the cat’s whiskers! There are a pair – and she was only NINE years old!!   So, I am sorry to say that over the generations standards have definitely slipped within my family.  I love stitching and think I am reasonably neat, but I could never approach Mary’s standards.

Goodness knows what she would have made of my fun poll!!  I was heartened to see that lots of people are also less than neat where it doesn’t show.  I thought I’d be brave and actually show you the back of a recent creation – here’s the front – 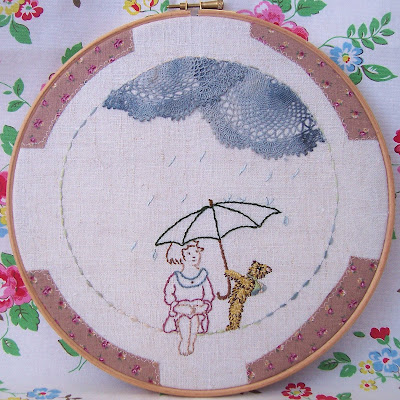 And the back!  It feels like showing my underwear! (Not that I ever do .. in public, that is .. but I think it would feel like this!) 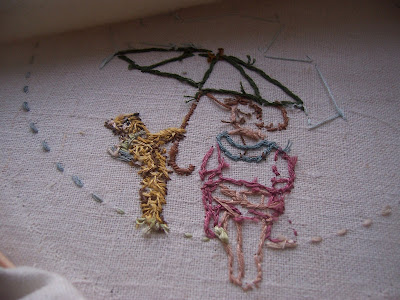 I think I fall into the middle category – not as good as the front, but not too bad.  No knots anyway.  My mum explained that knotting thread at the beginning of my work meant my first stitch was not secure as the knot could wobble about and slip.  So I don’t knot.  But I do hop about a bit where no one can see.
Just hopping off now in fact!!  Got to finish some robins (more about these another time – closer to Christmas!)  Sew long folks ..

Your great-grandma certainly did beautiful stitching, I think it was considered an important accomplishment long ago for a young lady to be able to stitch………very lovely.
florrie x

That is gorgeous, and it is nice it is still in the family, so many pieces get lost. It was important for children to learn to stitch, and they also learned their alphabet too.
Julie xxxxxxx

Don't consider yourself not being up to their standards, just be proud of your legacy – the genes you inherited.
She was unbelievable good, but so are you and I love to see your works.

But the rear of your stitching is SO neat compared to mine! I can't see that it matters anyway as noone ever sees it. I'll post the back of the piece I'm working on when I've finished it and you'll see how messy that is! I try not to knot, but sometimes I just can't help myself!

Your Great Gran was certainly very skilled – can't believe she was so young! As for your pants! – a rather neat finish I thought – mine would be much worse!

isn't it just amazing and wonderful and done by a 9yr old..imagine these days lol!!
i think your works of art are so DELIGHTFULLY whimsical & uniquely yours and i LOVE em to bits..and you LOVE creating them..that's all that really matters 🙂 x