Yes, really – a little nellifant called Nelly –  on a hill against a summer sky – deep dark indigo with silver stars sparkling like diamonds above her head …. 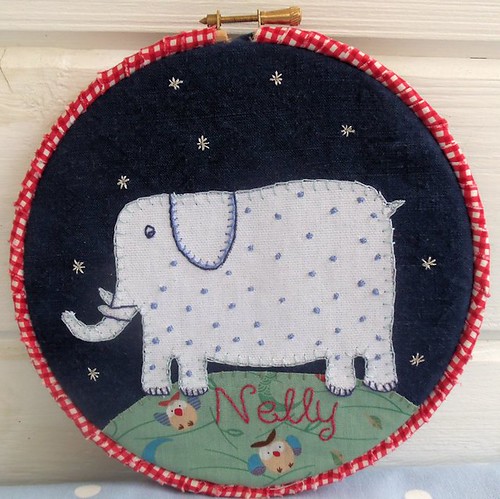 Nelly is all finished!  Unlike my blackwork butterfly which is still – and will be for some time yet – a work in progress.  I’ll report back on him very soon, but thought you might like to know that his turkey stitch body has worked perfectly – creating a wonderfully tactile contrast to his lacy wings.  I’ve shown him to some of my friends and the first thing they’ve done is to stroke his fluffy body with the tip of a finger.  I promise I’ll take another photo very soon.

Meanwhile, I’ve been working on another project for next month’s magazine – my Great British Picnic blanket – in anticipation of warmer days to come.  I’ve just finished the centre Union Jack panel …. 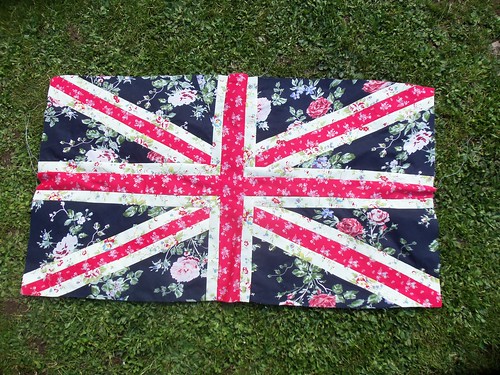 and I’m planning  to surround it with a blue gingham border.  It will also have its own integral bag featuring a Great British Picnic applique – if everything goes according to plan that is!  Both these projects will be included in the June issue of the Bustle & Sew Magazine, and hopefully the picnic blanket will be accompanying us on lots of lovely outings this summer!

Such beautiful things…I’m still absorbed in the May issue!!! I only wish I could get as much done!!! Thank you for your wonderful work.
xxKim

Nelly is so cute.
Julie xxxxxxx

Hello, Your Nelly is so cute and sweet love her!!
smjohns63 at yahoo dot com