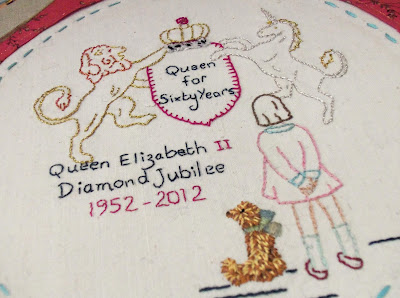 Today is the 60th anniversary of the accession of Queen Elizabeth II to the throne following the death of her father, King George VI in 1952.  This new Rosie & Bear design celebrates this special day and is the first in a new series of quilt blocks, to be released over the next 8 – 10 weeks, commemorating her Diamond Jubilee – both as Monarch of the British and Commonwealth Realms and Head of the Commonwealth of Nations. There will also be a special “extra” block to celebrate the Special Relationship between the UK and   USA during this period as well. 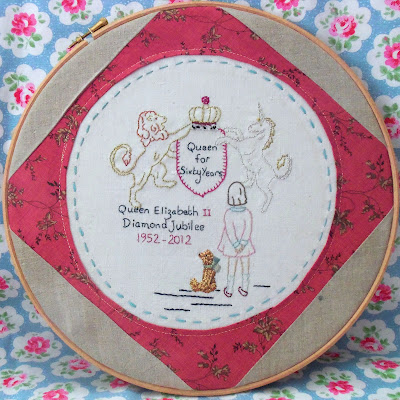 In this first block, Rosie and Bear are both on their very best behaviour (see how straight Bear is sitting – and Rosie has clearly been told to put her hands behind her back and not touch anything!).  But knowing the naughty pair, I’m sure this good behaviour won’t last as they take a trip around some of the Commonwealth countries and visit the USA in future blocks.
This pattern will  be included in the March Issue of the Bustle & Sew Magazine – out in just over 2 weeks, but I have exceptionally decided to list it before the magazine is published in honour of Accession Day today.  If you’d like to purchase it then you’ll find it in my Etsy Shop.
Back soon with more news of the Rosie & Bear Calendar Quilt too – Ani and her long arm quilting machine have worked wonders – can’t believe how beautiful she’s made it look – now all I have to do is bind it.

Three cheers for Her Majesty and long may her reign continue.

Beautiful! I had no idea that she took the rein when I was 4 months old. What a bit of history, too!