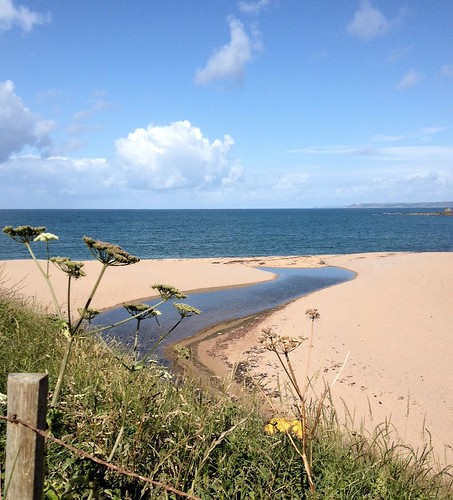 Today we went down to South Milton Sands.  I had some forgotten bits and pieces (including two unopened bottles of champagne – woo hoo!) to pick up from The Barn after the wedding reception, and thought it would be nice to fit in a trip to the beach as well.  The beach was stunning as always, and not at all busy as we were there quite early.  I say we … but someone was missing ….. 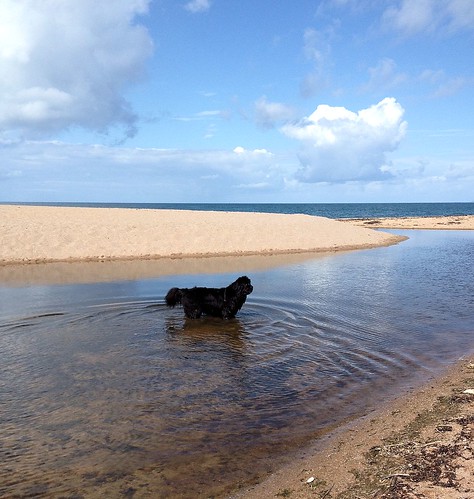 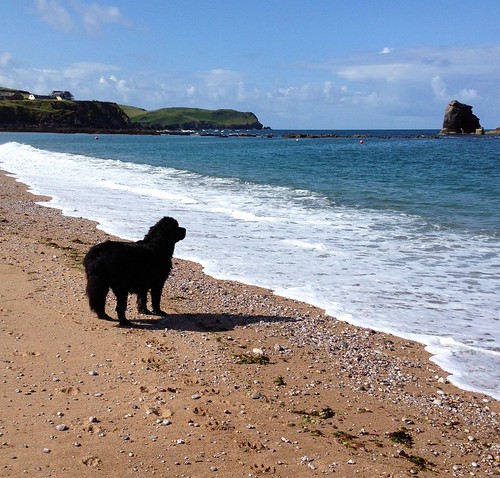 And no charging in and out of the waves.  Just a wistful gazing out to sea, hoping her big brother would somehow miraculously appear.  We both missed the big furry one – and he’s not home yet 🙁

This is because Ben is spending the day at the vet for a couple of minor operations.  His eyes have been very red and itchy and he’s suffered a series of infections – apparently as he’s got older his eyes have become baggier (I can so relate to this!) and his bottom eyelashes are turning inwards irritating his eye.  Luckily this is a minor procedure and the problem can easily be corrected.  But poor Ben is also having a big back tooth extracted – it has cracked and decay has set in.  He has been very quiet for the past few weeks, and although he hasn’t shown any sensitivity in that area I think it is causing him some discomfort.  So he’s going to be very sore when he returns home and Miss Daisy will need to be gentle and considerate until he’s feeling better. 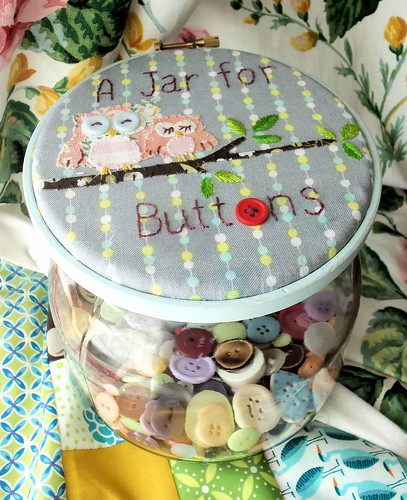 So to take my mind off poor Ben, I decided to assemble the first project for the August issue of the Bustle & Sew Magazine – and began by painting a hoop (something I promised myself I wouldn’t do again for quite some time after we painted nearly a hundred for the wedding!).  Then after binding the bottom part and inserting my embroidery it fitted beautifully snuggly as a lid for one of the Ikea jars left over from the wedding sweet table …. 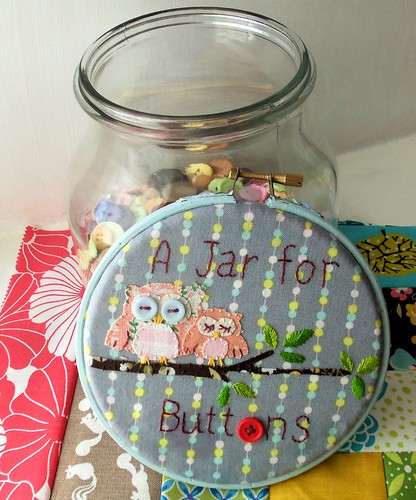 Useful as well as beautiful (to paraphrase William Morris!).  And it’s sitting on some of the blocks for my new quilt.  I might need to go and piece some more now to occupy myself whilst waiting for the vet to call and tell me it’s time to pick up Ben, who will need a lot of tlc over the next few days.  The pattern for my button jar top, as well as instructions for assembling it into a well-fitting jar lid, will be in the August issue of the Bustle & Sew Magazine.

Give Ben a huge hug from me!
Love the button jar
Julie xxxxxx

Get well soon Ben!! Hope Daisy is a good nurse!! South Milton looks a delightful spot! Even better with 2 bottles of Champers under your arm!! You can open them when Ben is home, safe and sound!!!!

I’m so sorry to hear that Ben is unwell. He’ll be in my thoughts and prayers for a very speedy recovery…
X Linda

Thank you Linda, he is looking, and feeling, very sorry for himself today but I’m sure he’ll soon be on the mend

Ahhhh so sorry about Ben. Hope he won’t be too uncomfortable after surgery. Take care.

Poor Ben – but he will be feeling much better with all the little things fixed!

Oh Helen, cant wait to try this project, loved the pretty wedding photos, gorgeous girl you have.
Thanks and all the best to big boyo,
BARBARA NZ

Oh dear poor Ben, my heart goes out to him as I also had a large back tooth extracted a few weeks ago – asked for a general but only had a local – perhaps I should have gone to the Vets – haha. And I am sure Daisy will be extra careful with him when he does come home, somehow they know when one of their animal siblings or us parents are under the weather.
Absolutely loved Rosie and Dan’s photos. And all your hard crafty work, the ‘barn’ certainly looked stunning. You must have been a very proud Mama.

Thanks Pam, he had a general as he also had a small eye operation 🙁 Daisy is lovingly watching over him, bless her.

Best wishes for Ben….hoping he is resting and taking it easy. Love the button jar.

Poor Ben, I’m sure by now he’s much more like his own self. My dad had his dog at the vets on Monday, getting two teeth out and he’s doing just fine now. Daisy did look very forlorn all by herself, hope she was gentle with Ben when he came home.
Your jar topper is so cute, another winner 🙂

Thanks Kathleen – Ben is feeling a little better now – he has slept most of today and is clearly very sore – but managed a little to eat and drink at teatime, so I’m hoping he’ll soon be back to his usual self.

Poor Ben…I hope he’s now home and recovering from his ordeal. Poor Daisy too, she looked very lonesome by herself at the beach! Hopefully it won’t be too long before both Newfies are having fun together once more!

I’m so pleased that Ben is back home and OK – ops. on our pets are always a worry, aren’t they? Please give him a gentle hug from me. What a lovely present your jar topper on a jar of colourful buttons or trims would make for a ‘crafty’ friend. Thank you so much for the super idea. As usual I can’t wait for the August issue of B&S!

Do hope Ben is almost back to normal now, poor thing but he will appreciate not having an irritated eye or a toothache.
Beautiful jar lid Helen, just perfect for the craft room or as a gift x