It’s been so lovely being able to sit out in the summerhouse and stitch again this week.  Sadly rain is forecast for the weekend, but until then I intend to make the most of the warm sunny weather by getting well along with our Spring Stitchalong – which is now up to week four ….

Until last week I was going along very sensibly in a well-organised fashion and was fully intending to continue in this way, having planned to take a look at different ways of working leaves in my next book.  But …. fate, in the form of two large fluffy black friends intervened.  This work is several weeks old now – I’m spending much longer on it than I usually do, as I keep picking it up and putting it down, researching stitches and trying out different combinations.  And the Sticky Sulky Fabri Solvy I used to transfer the pattern became rather old and curly at the edges.  This made it a magnet for dog hair!  I COULD NOT STAND IT ANY LONGER!!! (sorry about that).  So I had to backstitch the other books and second dog, then rinse it all away.  What a relief! 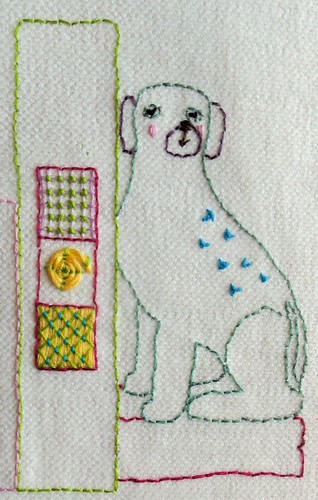 This week I tried some Danish knots, together with couching and laid work.  I’m really enjoying this stitchalong, especially seeing other stitchers’  interpretations of their libraries and discovering lots of new stitches (as well as interesting facts such as if you leave Fabri Solvy on too long it will become covered in dog hair!).

I am just as guilty as everyone else of sticking to just a few tried and tested stitches, so it’s great to stretch my boundaries a little and I’ll definitely be using some of my discoveries in future projects.  As part of the Library of Stitches Stitchalong I’ve been adding new videos to the DIY Video Library 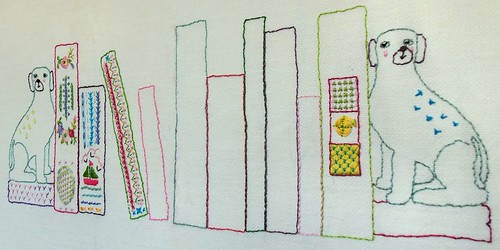 If you’re not stitching along and would like to join in – then don’t worry – you’re not too late.  You can find all the resources you’ll need over on the Library of Stitches page  and we have a very friendly stitchalong group over on Facebook too. And, best of all, it’s absolutely free!

Thanks so much xx

I’m enjoying the Stitchalong, although sadly have no photos to share as yet. I had a late start and have just begun the first book! I wanted to try using the solvy and had to order it on line. But I’m underway and love the idea of doing a sampler of stitches along the book spines. I’m learning so many new stitches!
X Linda

Don’t worry about being behind Linda – I will be leaving all the resources up for some time after the stitchalong’s finished. So pleased you’re enjoying it! xx

Thank you Helen—-I have downloaded the pattern. Excited to get started, but will have to wait until my Grand kids head back home. Treasia