Earlier this month I decided the theme for the July issue of the Bustle & Sew e-zine would be “Out and About” and this issue is certainly living up to that as Bustle & Sew travels around the globe for inspiration.  (And the way the weather has been here – gales and lashing rain – I wish I really was travelling around the globe to somewhere warm and sunny.  But I digress..)  In my last post I showed you a detail of “Where shall we Adventure” – now it’s all finished and mounted … 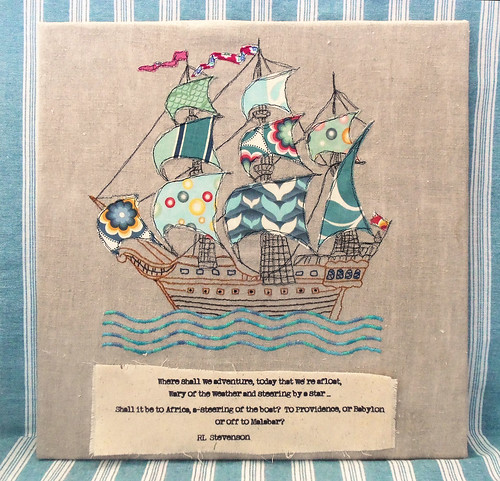 I don’t know if you can make out the text at the bottom of the picture – it’s printed onto a scrap of canvas, as though torn from the ship’s sails, in an old typewriter font.  (I have included this in the pattern of course)  It’s from the poem “Pirate Story” by RL Stevenson and reads:

“Where shall we adventure, today that we’re afloat,

Wary of the weather and steering by a star?

Shall it be to Africa, a-steering of the boat,

To Providence, or Babylon or off to Malabar?”

I’ve hand stitched the wooden parts of the ship and the waves of the sea, but have machine embroidered the rigging and masts. I decided to do this to try to give a light, airy feel to the top part of the ship, imagining it moving forwards under full sail.  I used fabric from “Salt Air”  by Moda for the sails – and also for my next project for the July issue…. some travellers who have journeyed from distant lands as stowaways on our sailing ship and have now taken up residence in the old apple tree…. 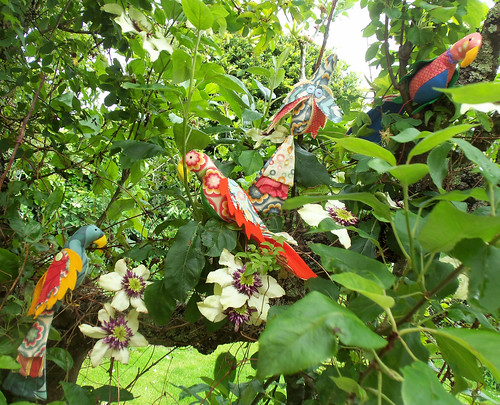 Yes, it’s Monty the Parrot and his friends who travelled here on the trade winds from Malabar.  Created from scraps of felt and fabric, with paperclip legs, they are huge fun to make – I can see them at a Pirate Party perhaps, or as a colourful and fun addition to a room. 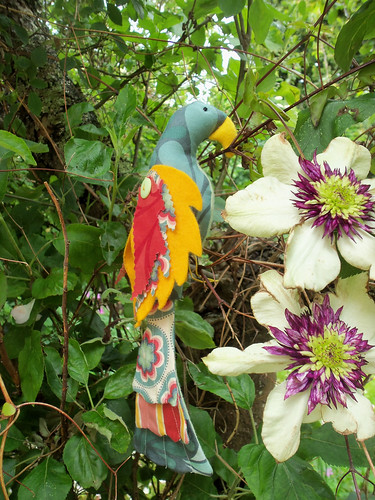 Here’s Monty himself perching happily on a leafy branch, keeping a close watch on Ben with his black beady eye.  And speaking of Ben, the rain seems finally to have stopped, though it’s still very windy – and I think we’ll seize the moment and head off for an early walk today – just in case it’s pouring later!

Those parrots look fun, looking forward to the next magazine. Hopefully after next month I might have some time for some new projects

Mystery ship unveiled! And it truly is amazing! Your use of free-hand machine embroidery on the rigging and masts is wonderfully done and does indeed add a sense of movement! I love the addition of the poetic lines from Stevenson’s “Pirate Story”. It’s a wonderful project of mixed thread art…challenging and fun!
As a bird lover, I have to say that “Monty” is lovely! He looks such fun to make…I can’t wait for the next e-zine issue!
X Linda

I love the parrot…my family has parrots and I myself have a small amazon parrot…can’t wait to put this one together!!