All year round Ben and I go for walks …. along the beach, around the Ley, through the woods at the back of the village – we must cover hundreds of miles in the course of a single year.  I accept that during the winter months quite a few of these walks will be more of an ordeal than a pleasure – wrapping myself in coat, scarf, hat and donning my trusty wellingtons before setting out into the howling wind and driving rain.  But that is February … NOT JUNE!!  This is not how it’s meant to be!! 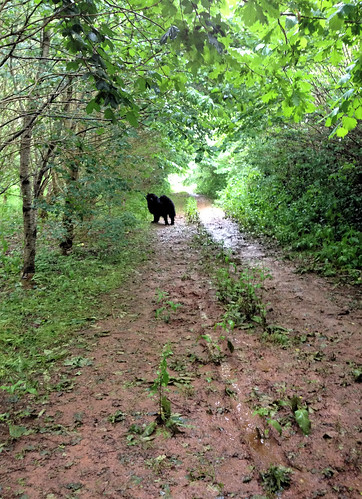 Here in Devon we specialise in mud – thick and gloopy, thin and slimy, slippery mud, slidey mud, sticking to your boots and paws kind of mud – however by June it’s mostly disappeared – but not this year – this is NOT how it’s meant to be!!  Anyway .. it’s still nice to get out and about, and Ben does love his walks.  Yesterday in the woods we were startled by shrill squawks and crashing noises – then – no more than about 3 or 4 feet over our heads – a hawk came fleeing through the branches closely pursued by two enraged blackbird parents – each no more than about a quarter of his size – but bravely protecting their young.

After this drama, the rest of our walk was uneventful and I settled down for an hour’s stitching on the sofa in the kitchen, with a nice cup of tea and Ben slumbering next to me.  I finished off the Australia block for my Rosie & Bear Diamond Jubilee Quilt (coming with this month’s Bustle & Sew magazine)…. 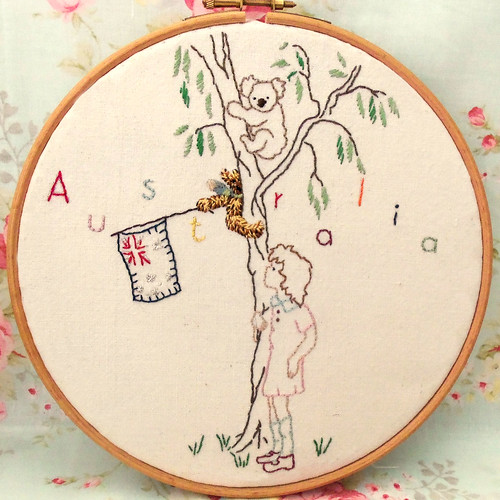 .. in which Bear is pretending to be a Koala Bear.  Not sure he’s very convincing though!!

At about 4 o’clock I’d finished stitching – time to get up off the sofa and pop to the post office before it closed.  As usual Ben was deeply asleep – worn out by the events of his walk that afternoon … and, as usual, I was too tender-hearted to disturb him.  Ben, as you know, is extremely large.  And my legs are not very long.  So every time this happens I go through the following gymnastic exercise… 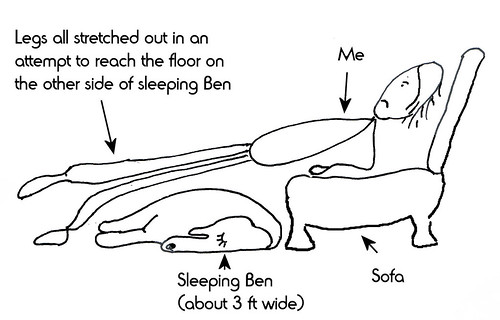 And I am convinced that this is not how it’s meant to be either!!

My mum always said dogs are like children! They lay/play in the wrong place at the time they want to do it and you don’t disturb them because they are HAPPY!
Julie xxxxxxxx

The things we go through for our pets! lol! Your sketch is so funny!!! I had quite a laugh because we’ve all done/do this!

I love the Australia block for the Diamond Jubilee Quilt. July’s e-zine is certainly going to be amazing with all the new projects….just a few days now to wait!

Adorable! . . . dreaming of one day having a big bear of my own at my feet. Or maybe just a very large cat!
Big hug,
Deborah

So funny! I’m always adjusting myself so as to no bother my dog while she’s sleeping! I love the illustration 🙂
Can’t wait till the e-zine arrives!!

I am laughing out loud at your sketch! I can so relate! Loving your blogs too…still. Thank you!