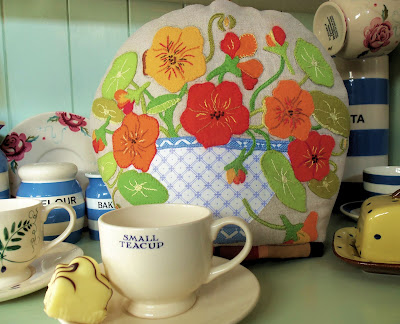 This afternoon was far too nice to spend indoors, so Ben and I decided to walk down to Batson Creek.  We haven’t been that way for a while and so we decided to have a picnic.  That is to say, I decided and Ben enthusiastically agreed.  I was going to make sandwiches … but the bread bin yielded only a couple of crusts, so on the way I stopped in Kingsbridge to purchase …. 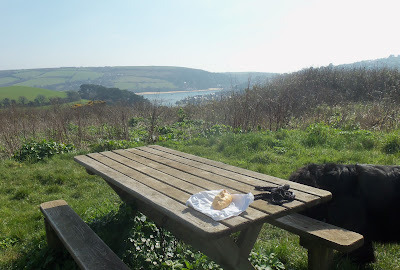 a pasty .. from Portlemouth Pasties.  Still warm from the oven. So delicious I had to take a picture of its final moments.  Seconds after this was taken it had been bitten into, and before very long only a few crumbs remained. 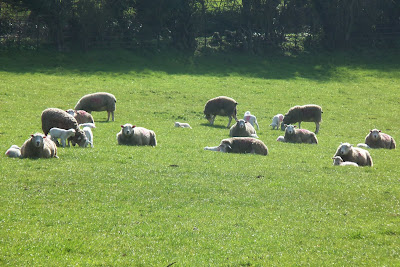 Look at all those mother sheep watching us with the greatest of suspicion.  I zoomed right in to take this photo as I didn’t want the view of a huge black bear dog to bother those babies.
I would have liked to have posted a few more photos of our walk – it was so glorious – but unfortunately the camera batteries expired just after I took this shot.  This might have been because I’d spent part of the morning taking photos both of my Nasturtiums pattern (at the top of this post) which I’ve now turned into a tea cosy to take to the Fair next week, and also of my new pattern .. the Circus Parade. 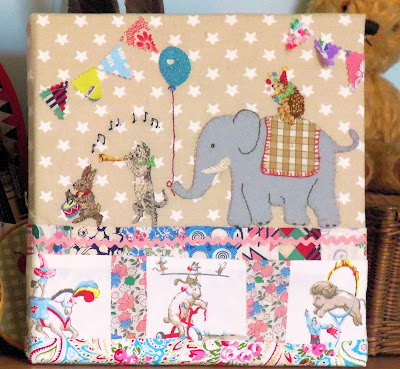 I think this would make a great gift for a nursery or young child – I’ve put some Cath Kidston fabric patchwork pieces at the bottom, but it would be easy to stitch some personalised text to fill this space.  The elephant is felt applique and clearly the cat is making an enormous noise with his trumpet!! 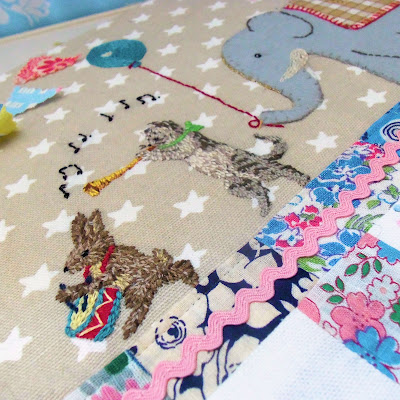 The bunting is individual fabric triangles simply machined across their tops.  I’ve tried to put lots of interest into this design, to invoke the fun and razamatazz of the circus parade – imagining what a young child would enjoy most.  I’ve mounted the design on a 12″ square artist’s canvas block – so easy to do with a staple gun and I think the shape of this picture works better this way rather than in a hoop.  This pattern will be included in the April issue of the Bustle & Sew Magazine which will be published on the last Thursday of the month.  It’s also available in my Etsy Shop.

And finally … spot the edible prop in this photo!! It’s a Mr Kipling French Fancy.  That is to say … it was a French Fancy until about an hour ago.  Now, like the pasty for lunch, it no longer exists.  Not the healthiest eating day – but then we did have a very long walk!!

What a glorious day you've had. My mouth was watering as I viewed your lunch and treat. The momma sheep must have been wondering why you were allowing such a large bear dog to follow you. Super photos!

I'm truly hoping I can pop in for a visit on our next trip across the big pond. I'd love to see your artwork up close, to meet you and ofcourse, to give Mr. Ben a pat and nose smooch.

Hugs to you from me and my three bear dogs!

I love the Tea Cosy because I love nasturtiums– They remind me of happy childhood days . So thank you for your lovely post from my area of the world down in Devon.
Kindest Regards Linda

It was a lovely day today wasn't it? You really do live in a beautiful part of the world, and those sheep are so cute. Really love your blog and your designs! Sarah x

Great day!!! Thank you for sharing, the pictures are so beautiful! I like both your works but I find the Nasturtium pattern is simply lovely, it's a gorgeous teapot cosy. Enjoy your sunday, Clara.

Hello from United States, your blog is so lovely I enjoy reading it now and again, more often than not. I have always wanted to see the UK and I do that through your blog!!!

I love the nasturtium tea cosy, very sweet! So is the Circus Parade…great work!

I haven't tried a French Fancy…must search them out. 🙂

What a beautiful day and wee lambs! I LOVE your circus pattern, you are so inspiring, must get on with more patterns when I can make more hours in the day 🙂 I'm away next week to re-charge batteries so will maybe get some done then. Hope the fair goes well, Catherine x

What a wonderful day you had. Thank you for sharing! And I love your new tea cosy design. Lovely!

I just love your tea cosy too!! My mum made a beautiful tablecloth and matching napkins with all hand embroidered Nastursiums when she was a teenager, and it won a prize in our State Fair many years ago. My mum is 83 now, and in a nursing home, and I have her beautiful embroideries, which I treasure. She didnt teach me to sew, but I used to love watching her, and I want to teach my granddaughters once they are old enough. I love hand stitching and embroideries as well as quilting. Hugs n Blessings from Sue in Oz xx