I had planned to tell you all about my lovely weekend.  The fantastic summer weather continues and our parish fete at Stokenham was a great success …. 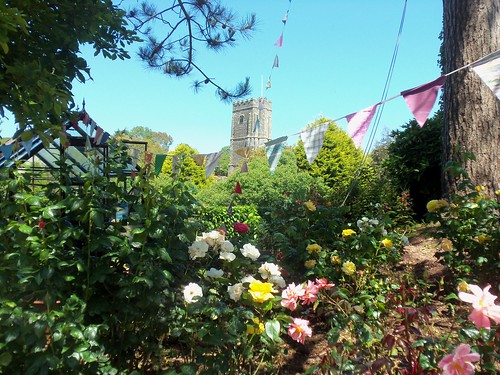 … lazy lunches in the summer house ….. 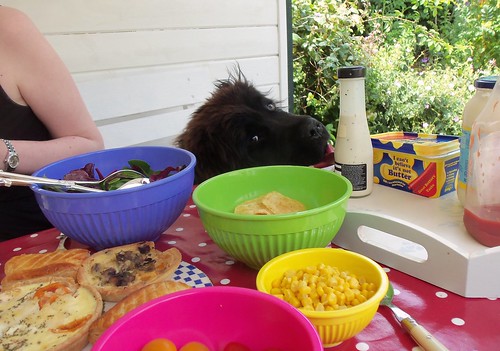 … and a new young Blackbird family have moved into our hedge…. 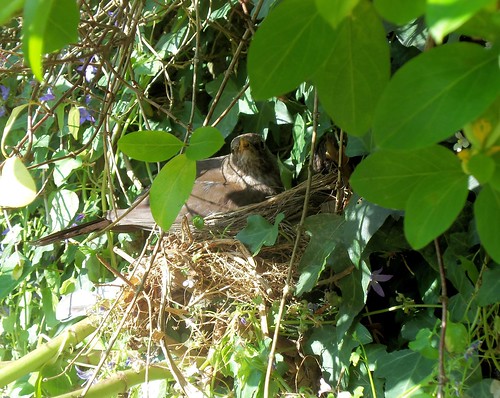 But yesterday evening, as I took the Newfies for a walk in Brooking Wood, just a little way from home, we had a horrible experience.  We were strolling along the path together, with Daisy leading the way as usual, whilst Ben brought up the rear of our procession in a very stately manner.  Then suddenly, from nowhere, a Rottweiler burst out of the undergrowth snarling and growling – and started to attack Daisy.  She was terrified – she is quite large now, but at 8 months still just a baby – and a baby of a very non-agressive breed too.  She tried to flee, but it had hold of her back and was beginning to drag her down.  I could hear the owner somewhere in the distance shouting “Get here you b***** f******!” but of course it took no notice.

Luckily help was at hand – Daisy somehow managed to wriggle free, and then a huge black furry shape bristling with anger charged into the fray and pushed himself between his baby sister and the Rottweiler.  It was Ben!!  I did not know he could be so scary – he was clearly absolutely determined that no Rottweiler was going to hurt his Daisy.  He was growling and somehow puffed himself up so he looked even more enormous.  (and at around 170 lbs he was big to start with)  He didn’t attack though – just demonstrated the classic Newfie behaviour of putting himself between the loved one and the threat.  The Rottweiler looked uncertain, but just as I think it was going to launch itself at Ben, the owner appeared, grabbed it and started to wallop it with the lead.  I was then able to comfort and reassure Daisy who was shaking with shock and fright, as well as suggesting to the owner that a leash and muzzle would be appropriate when walking this dog – imagine (1) if I hadn’t had Ben and (2) if it had been a child that was attacked.  Muttering something to himself the owner dragged the dog away. 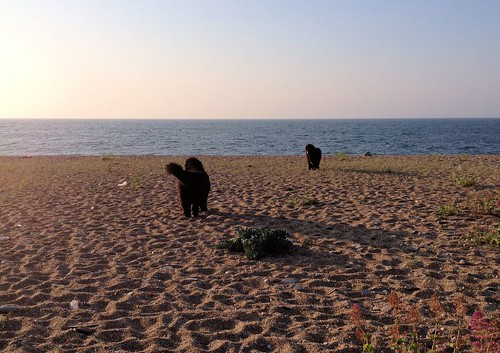 You wait for me little one

Fortunately Daisy wasn’t harmed – her thick woolly coat – and Ben of course – saved her, and when we returned home there were extra treats all round – and a glass of wine for me!  Today I took them to the beach in the early morning cool .. no Rottweilers there …. 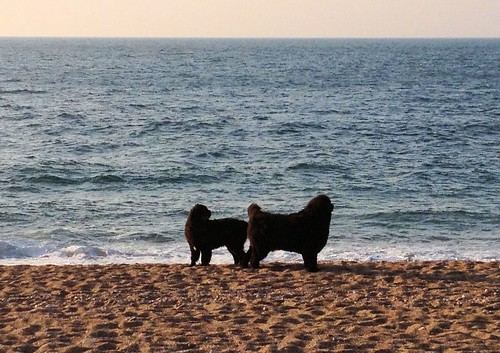 You check that way and I’ll look over there

And it’s good to know that Daisy can rely on her Big Bro to keep her from harm’s way (even though he thinks she is very annoying a lot of the time!) 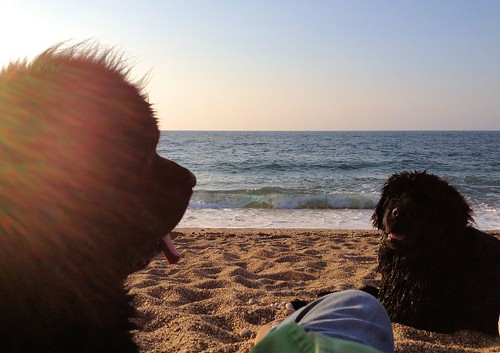 You’re safe with me little sister!

Oh, what a terrible story! I am so glad Daisy wasn’t harmed!
The Rottweilers are fighting dogs… but owners must control them and know how to treat them!

Hope You, Daisy and Ben are OK quite a shock to anyones system.
Julie xxxxxx

How frightening! I hope all three of you are feeling calmer today. Well done, Ben!

What a super boy, Ben! I’m glan that nobody got hurt.
Hope this horrible experience doesn’t affect Daisy.

Ben is a hero! What a good thing that you had him there with you.

Oh my what a frightening ordeal!! So so glad that Daisy is not hurt! Very proud of Big Brother Ben came to protect her and you too from that nasty beast!

Hope you all are feeling better today!

Hugs and Blessings to you and your brave furry sweethearts,
Jan

What a terrible experience! Ben is such a brave dog! I’m so glad that everyone is fine!
X Linda

That was certainly a frighteningly close call. I wish dog owners with aggressive dogs were more responsible. You hear about this type of thing much too often. Ben is like a dog in a story book, always steady and protective.

What an awful experience for the three of you. Hope Daisy (and you) are fully recovered.

How very frightening. I would like to say that in my opinion as a non-dog owner, I think this could be the owner’s and not the dog’s fault. I have only ever known two rottweilers and they have been soft as putty and in actual fact the two best behaved dogs I have ever encountered, a fact I have put down to very strict and consistent training. Even a chihuahua can give a nasty bite if left to run wild, which yesterday’s dog was doing.

How terrifying! I’m so happy you all are all right. What a sweet protector that
Ben is! And how awful the Rottweiller owner is to be beating his dog! Maybe that’s why his dog is so aggressive! Well, here in the US beating your dog is not acceptable and the police would be called to intervene on both accounts. The attack on your dog and the owner abusing his dog! That is awful. Thankfully you weren’t attacked either.

What a great brother. Mine is like that, well, except for the being named Ben part, but he still turns into Mount Shasta at times, just like Benny Boy.

I have been terrified of dogs since I was a toddler. I doubt that I have to explain why. Last time we saw a dog off it’s leash, it was at a public park, and she was a golden retriever. She saw my parents and I and started running towards us at full tilt. I grabbed my mom and tossed her between myself and the canine freight train before I even thought about what I was doing. My mom grew up with dogs so it was no worry for her. Nothing bad happened, the retriever was one of the type that had an “”oooooh, new friends! i’ll go say hello and have some wrestling fun!”” attitude and disposition, so I was in no danger, except of drowning in an over-enthusiastic dogs slobber, but still, dogs that cannot be controlled by their owners can be frightening for everyone. The owner did apologize, but I would have preferred that she just control her friend. Give both Brick-Wall Benny and Not-so Dainty Daisy a few skritches from a cat person across the pond.

No wonder the rottweiler was aggressive! The owner walloping him with his leash! Not a very kind or responsible dog parent.
I’m so glad to hear that Miss Daisy is doing well. She is just a precious little girl. And, I can completely understand what wonderful dogs Ben and Daisy are. My mastiff would not let anyone near me that she did not know. It is a very subtle, but powerful protective instinct.

So very, very thankful you are all ok. I live in Detroit, in the US, where there are tons of these dogs – they kill small children on a regular basis, I wish they would outlaw them. They’ve also attacked seniors, and folks just walking down the street. Big hugs to you and your babies…

Thank goodness all Is well with your little fur family. I had tears reading your account of this scary incident. I feel bad though for the rotti, the owner sounds to be very cruel thus making for a abusive dog. I had a Rottweiler show up on my front porch with my Chihuahuas going crazy nuts, and that sweet guy just wanted a drink of water and a guiding hand home. The day at the beach sure made all the bad memories go away.

Hope Daisy has recovered completely today. Some people just shouldn’t have responsibility for a dog if they can’t teach it basic training or have control over it.

Oh, what a terrible experience!!!! nothing happened, thank God! I hope the owner of that dog uses a leash and a muzzle next time. Ben is great! 🙂