This year I was delighted when a pair of jackdaws decided to take up residence in one of the old nesting holes at the back of our house.  These holes, I am told, were originally designed to encourage doves or pigeons very many years ago, but since I’ve lived here they’ve never been occupied. 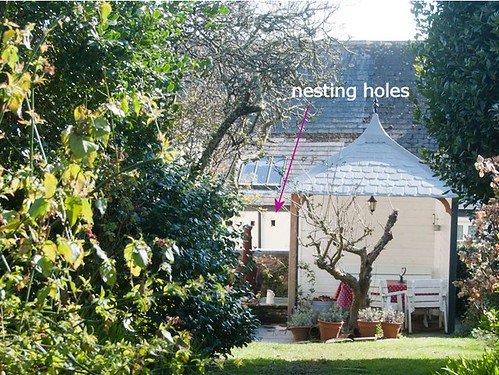 You can just about make them out in the photo above – there’s actually a row of six holes, each measuring about 8″ x 5″ and going back about 15″ into the old cob wall behind.  This pair of jackdaws were so comical to watch with their bright shiny blue eyes and glossy plumage as they bustled around checking out all the holes for suitability to raise their brood.  Eventually they settled upon the third from the left (I have no idea why) and started nest-building.

The male clearly had ambitious ideas for their new home and kept returning with twigs and sticks measuring between 12″ and 15″ long.  Clearly these were never going to fit into the hole, but he would spend ages wrestling with each one, trying first one angle and then another, even attempting to force them in using brute force whilst the female sat on the roof above scolding him for his incompetence.  Eventually as the pile of discarded twigs grew in front of my back door (at first I blamed Daisy for this!), the female took control of operations and their nest was completed.  This was in the early spring, and for the last few weeks they have been raising their noisy brood, making increasingly frequent – and frantic – trips backwards and forwards with juicy morsels for the collection of hungry beaks within the nesting hole. 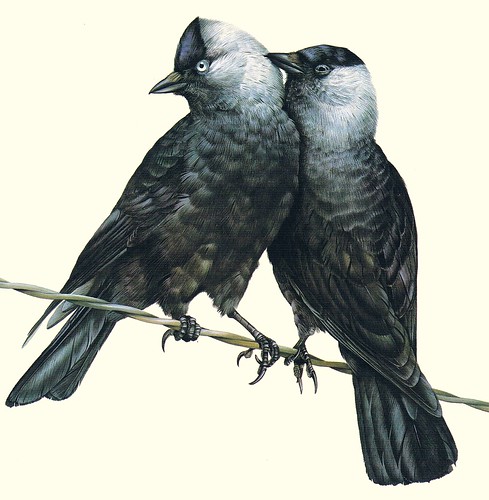 Illustration from Lambert’s Birds of Garden and Woodland

Last week the youngsters fledged and four strong and healthy chicks – I say chicks, but they were nearly as big as their parents – took to the skies, learning to swoop and circle in the warm summer breezes.  I consulted my bird book which told me that they would be dependent on their parents for another month whilst learning to fend for themselves.  But yesterday – disaster struck.  It was a day of strong gusty winds and heavy rain – and the male jackdaw, caught unawares by a particularly strong gust, and perhaps a little off-balance as he was carrying more food for his chicks, was blown into the side of the house.  Later I saw his crumpled body in our cellar, his head at an impossible angle, his neck clearly broken.  But even worse, by his side remained one of the four chicks plaintively calling to him.

This morning the chick was still by its father’s body, though the mother and three remaining youngsters had been trying to persuade it to return to the sky, so I clambered down the slippery stone stairs down into the cellar and retrieved the body, hoping that once it was gone the  chick would return to its family.  I didn’t try to catch the youngster itself as I thought that might do more harm than good, and am hoping that I’ve done the right thing and it will survive.  I can hear the mother calling it now – so am keeping my fingers crossed!

Oh dear how sad, poor thing, poor little one who favoured his/her daddy. Let us know what has happened to the poor chick
I once watched a magpie trying to get a rather large twig between two upright branches of a tree – it was fascinating to watch.
Julie xxxxxx

Oh, that’s such a touching and sad story! Please update and let us know the outcome – poor Daddy! Could you call a local bird sanctuary and ask if there’s anything else you could do – without doing more harm?

This makes me want to cry. Poor birdies.

Such a sad story. Please let us know if the mother bird is able to gather her brood together…
X Linda

We had a situation with a family of Scrubjays. Neither parent passed away, but we were out doing our weekly lawn mowing etc, we garden (as in flowers and veggies, almost daily) but on Sundays we mow, weedwhack and water etc. Anyhoo, mom and dad Scrubjay were both YELLING at us and diving down at us, we had no idea why. Their nest was high enough that normally we did not bother them while gardening. It was not until we noticed that thier little one (we only saw one that year) fell from the nest (two days) before fledging. Their baby was on the ground near the fence (we had not seen Junior) near where we were working. We were concerned about the little one because there are plenty of stray cats (out community has no Animal Control to speak of) in the neighborhood, and we knew that the young ‘un wouldn’t last too long. We left that part of the yard to finish the next weekend, but in regards to their baby, Mr. and Mrs. Scrubjay surprised us. Later on, after we turned the sprinklers off, mom and dad were diving, nipping and pestering the heck out of a stray cat. We were worried about Junior over night, but we didn’t need to, he was still alive and flopping from tree to tree two days later, practicing his flying. Obviously mom and dad Scrubjay managed to keep the strays away from Junior long enough for him to flop and flap his way back up into the trees…….

Nature can be cruel at times. Everything has a purpose. I am glad that you were keeping watch and helped when your could. Your good thoughts and deed will not past without her silent eyes watching. You were very kind to try and help. Did it work? Did the little one rejoin the family? I hope so.