This weekend felt very strange as I returned on a visit to the South Hams, Devon where I lived for many years.  It was lovely to see old friends – we had lots of catching up to do – and spend some time revisiting some of our old haunts.  A special favourite has always been the sandy beach at Mill Bay, just across the water from Salcombe.  There’s a path through the woods that leads down to a second, more secluded cove where Ben and Daisy loved to play, and we were pleased to see the old familiar wooden post still spelled out the reassuring message … beach only!

This too was just the same as always – a stretch of golden sand – and at this time of year totally deserted….. But why should this old familiar place have felt so strange?  The next picture holds the clue ….. Yes, there is only ONE rather over-excited Newfie heading towards the waves.  That’s Miss Daisy you can see ….. Breaking into a rather lolloping clumsy sort of gallop in her excitement to enter the water…. And she’s in!  Bliss!! (though she had forgotten about waves, being more used to swimming in lakes these days, and she disappeared under the surf a couple of times – which all added to the fun as far as she was concerned!) Then afterwards, there’s nothing like a roll in the sand to beautify your fur …. Luckily most of it fell off after a good shake! What a happy looking dog!  And where was Ben you may wonder?  Well Ben is now ten and a half years old – a great age for such a giant dog.  His legs are rather wobbly and he can no longer make the journey back to Devon – it’s simply too much for him these days.  So he remained at home where he was so spoiled by the rest of the family that I don’t think he missed me and Daisy at all!  No, not one little bit!  Though he was very pleased to see us both – especially Miss Daisy – and hear about all her adventures! 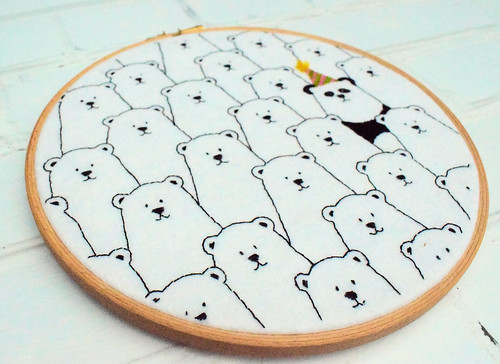 And  while I was away I even managed to fit in a little sewing too – something completely different to my usual sort of project – I hope you like it!  The pattern will be in the November issue of the Bustle & Sew Magazine.

Oh Daisy I’m glad I don’t have to brush the sand out of all that fur. But you sure looked like you were having a great time.
I’m sure Ben enjoyed his ‘time out’ but was pleased to see you both home.
Love hearing about their adventures Helen.

Thanks so much Pam – and yes, there was a definite “crunch” underfoot on the kitchen tiles yesterday where Daisy had been sleeping – even though I brushed her it’s impossible to get all the sand out. Still, she has a trip to the groomers on Wednesday so is sure to return looking very glamorous – for a while at least!! xx

Love that last picture of Daisy she looks so pleased with herself. I know that walk, walked it many times with my parents as a child, and played on the beach there when I had my childhood holidays. Those pictures brought back memories for me.

She does indeed Julie! It is a beautiful part of the world, and not too far away even now for a short visit every now and then. xx

How lovely to see Miss Daisy lolloping about, clearly enjoying herself at the seaside. Ben probably appreciated the brief peace – especially as he was being spoilt!
I love all the embroidered bears on the hoop and you’ve managed to give them all slightly different expressions too.

Love,
Diana (woofs and licks to Ben and Miss. Daisy from Inky and Echo). xx