Here is the naughty Miss Tilly making herself very comfortable in a TOTALLY forbidden place, deep in blissful dreams and happily waving those four small paws in the air …. 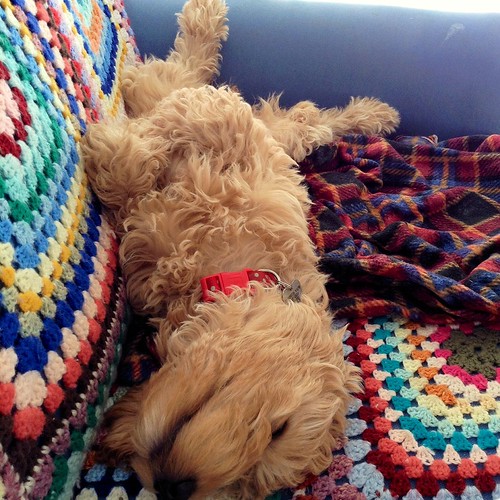 Like all puppies, her bouts of frantic energy, chasing, scampering, nibbling, stealing things she shouldn’t and generally being a bit of a pest, are punctuated by periods of deep sleep, from which she can only occasionally be persuaded to wake for her photo … 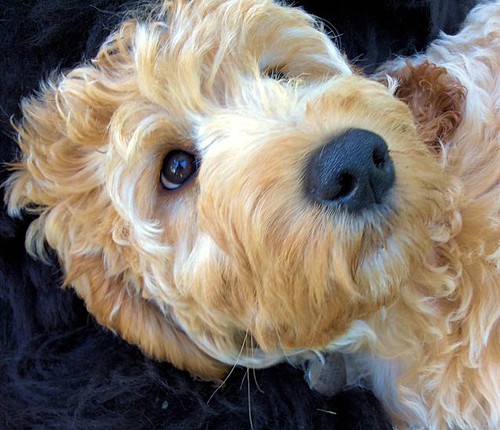 (It’s so much easier to photograph a dog that isn’t all black!).  Tilly shows no fear of the newfies at all, even though Ben and Daisy are probably about 10 times her size, and doesn’t hesitate to use them for a pillow when the need for sleep overtakes her (yes, that’s Ben’s bum her head is resting on above – see the full pose below!) 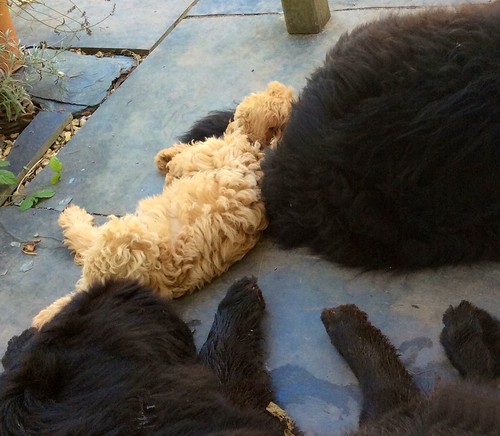 We loved having her – though she has totally worn us all out.  It’s nice to have a peaceful few days to recover our energy levels until she returns for a longer period while Rosie and Dan are away on their honeymoon.  They are heading off to a much warmer, sunnier place, a very long way south and so, along with my Christmas projects for the October Magazine … 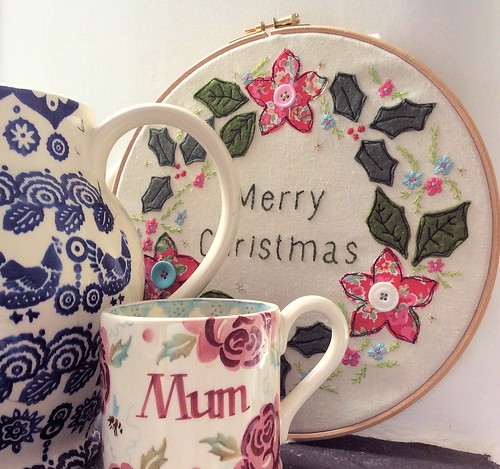 I’ve been doing some totally tropical(!) dressmaking for Rosie.  We were both delighted with how the Camber dress pattern from Merchant and Mills turned out – it was a dream to make and fitted Rosie’s body shape really well with only minimal adjustments needed.  Rosie chose a much brighter fabric than I’m used to working with – but I think it looks very nice – extremely suitable holiday wear …. 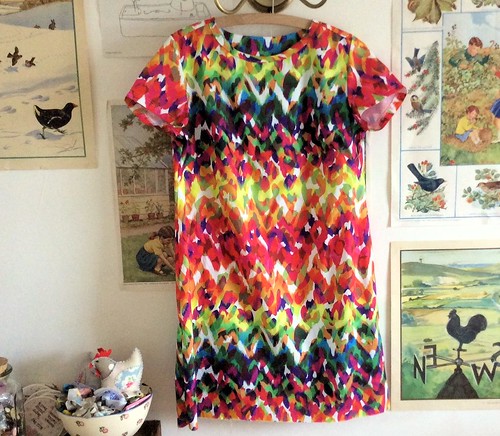 Just the hem to take up now and it’s finished, then onto the next one – only a few days left to finish it before they’re off.  Luckily it’s a really user-friendly pattern. The pieces fit together well there are no zips or other fastenings, and now I’ve worked out the yoke construction I don’t think it takes more than 3 or 4 hours in total.  Better not tell Rosie that though, or she’ll be wanting one for every day of the week!

Darling dress! Hope you post pictures of Rosie wearing it!

The doggies are so cute too, as usual! Yes a puppy is like having a baby again, very tiring! Yet so fun! Enjoy!

Thanks Valerie, will try to persuade Rosie to let me post a picture! xx

Thank you, though the fabric is a little bright for me!

LOve the dogs, all three. The dress looks great, hope she has a wonderful time
Kathy

Thanks Kathy, sure they will. She has promised to send me a picture of her wearing her dress xx

Awwwww! Tilly is sweet. I wonder what little doggies dream about/
Julie xxxxxxx