At this time of year, especially when the weather’s warm, the Newfies and I like to walk early in the morning and then again in the evening when it’s cool.  Today dawned bright and sunny so I decided that we’d go on one of our favourite – and slightly longer walks around Coleridge Farm and back through Stokenham.  We headed up through the woods at the back of the village, where the foxgloves are blooming in profusion – 2013 seems to be a really good year for them, I don’t remember seeing as many as this before …. 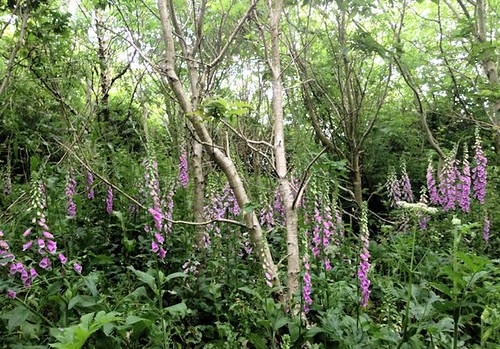 Then out of the cool shady woods and along the footpath down towards the sea …. 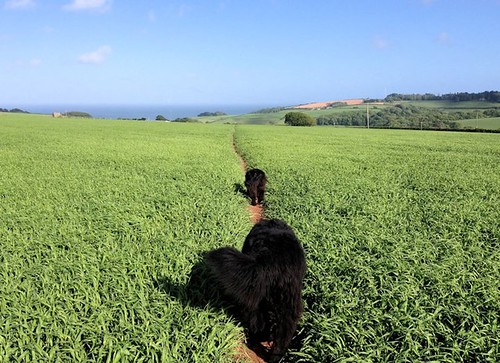 before turning for home past the hay meadow. … 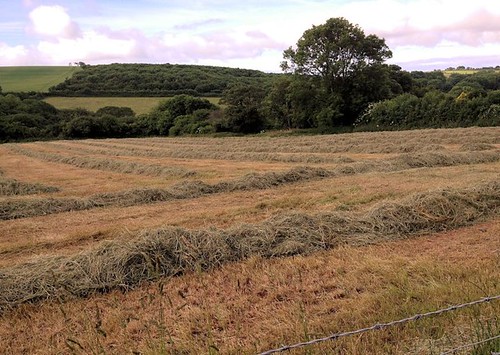 Even though we left early, it was very warm by the time we returned so I decided to work in the summer house.  You might think there’s nobody keeping me company …. 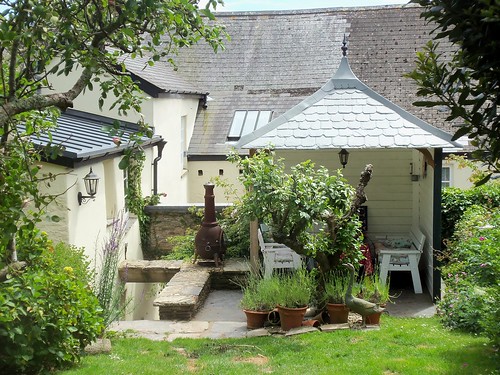 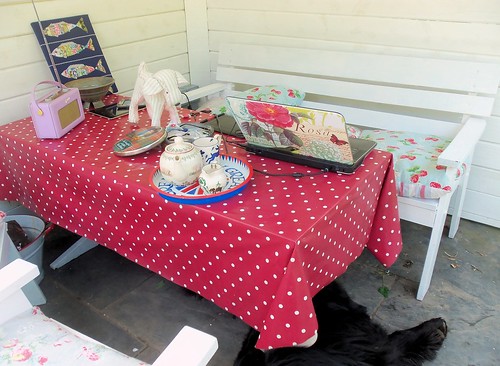 One large black furry shape – that’s Ben.  And all the clutter on the table – evidence of my grasshopper tendencies – unable to concentrate on any single task for too long I tend to jump from activity to activity.  But where’s the second, slightly smaller black shape?  If I lift up the tablecloth you’ll see …. 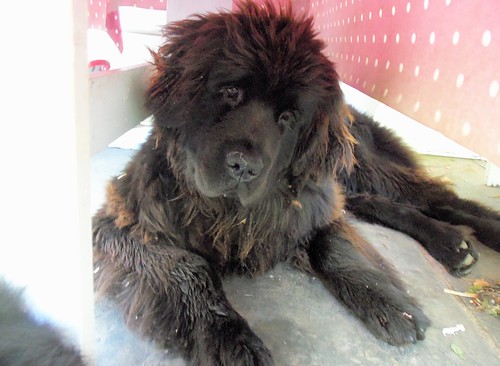 a most uncharacteristically dozy-looking Daisy!  I think she’s hoping I’ll go away so she can concentrate on her snoozing!  Amongst all the mess on my table did you spot my new softie – a little stripey dog called Sidney?   He’s not quite ready for his photoshoot yet, I’m still stitching on patches and claws – but he’d love to  say “Hello!” 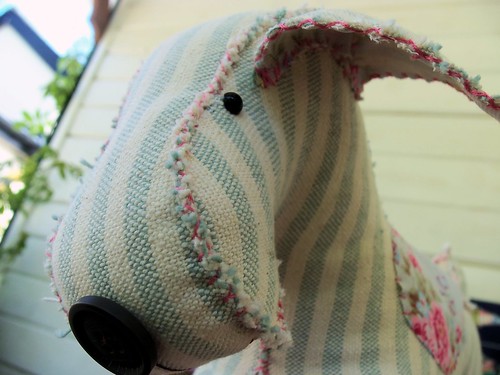 He’ll be in the August issue of the Bustle & Sew Magazine, and I’m hoping to create a video tutorial for magazine subscribers – Sidney’s legs have some simple wiring, and I thought you might find a tutorial useful?  But back to saying “Hello”….  If you have a moment to spare, please pop over to my friend Jacqui’s Facebook page

Where she’s having a brilliant like and share giveaway ….. one of her original water colour illustrations personalised with the initial and name of your choice – a great gift for a specially lucky small person perhaps?

I should think your extra hairy dogs find the hot weather a bit difficult? I envy you your summer house, what a lovely place to sit. And I’ve been admiring your laptop – did you decorate it yourself?

Hi Amanda, no they don’t enjoy the heat, but luckily below the summerhouse there is a shady north-facing slate courtyard where they can hang out in a cool fashion all summer long! The laptop skin came from gelaskins who have an amazing variety of designs for all sorts of gadgets. Hope you and Ruby too are enjoying the summer sunshine xx

Thank you for sharing your walk and the beautiful landscape along the way. I especially enjoyed the photo of the foxglove…Stunning!
X Linda

Hi Helen, you live in such a beautiful place, I feel a little jealous haha! I love the sneak peek of the new Sidney, looks like he will be as cute as all the others.
(smjohns63 at yahoo dot com)