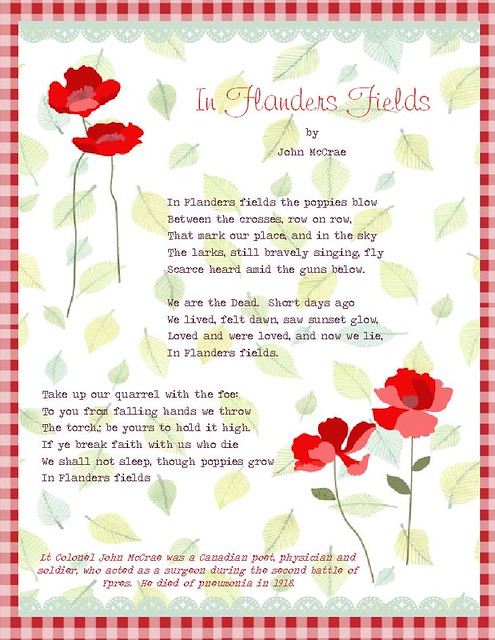 Today is of course the 100th anniversary of Britain’s entry into the First World War.   When I was a child, this conflict was still very much part of living memory and both my grandfathers fought in the trenches.  I never knew my father’s father – though I know he was wounded and always walked with a limp as part of his foot had been shot off.

I adored my mother’s father  – my Granddad.  He was captured in 1916 and held as a prisoner of war, though my grandmother didn’t know he was alive until the war ended and he came home again, as he was simply posted as “missing.”  I can only begin to imagine the joy she must have felt on his return.  He gave her a tiny silver heart that he’d kept all through that time which she wore on a bracelet for many years – and this year I stitched it into the inside of Rosie’s wedding dress to bring her and Dan good luck.

So in honour of my grandparents whose lives were affected by this terrible conflict, and all the others of their generation,  I’m posting this well-known poem by John McCrae today and will be switching off my lights at 11 pm tonight.

My Great grandfather, (maternal grandmother’s father) died two years after I was born so I probably met him, but I do know he came back a broken man. He signed up at the beginning of the war.
Julie xxxxxxxx

What a heart rending story Helen and a lovely thing to do for Rosie and Dan, so in spirit your grandmother was at the wedding.

My great granpa served in France in WW1. Blessings.

What a special memento to sew into Rosie’s dress – very special.
New Zealand started anniversary events yesterday – with a 100 gun salute in the capital Wellington. There are many other things planned

A beautiful tribute to life and the continuation of family, and a touching beginning for Rosie and Dan. My maternal great-grandfather was in the Army Corp of Engineers during WW1 and although I never knew him or where he was stationed, I think of him and the sacrifices made. Blessings to you and your family…
X Linda

The poem says it all. Thank you so much – we all need reminding from time to time of the great sacrifice so many made for our freedom today. My grandfather served in the First World War and when he came back he would never talk about it nor did he ever leave England again.
Love,
Diana.

No, my granddad would never talk about it either. x