I was going to announce the winner of the Valentine Bunny giveaway today, but am still feeling totally shocked by the ferocity of the storm that hit the South West of England overnight on Tuesday.  The damage caused is tremendous … we are once again without a rail link to the rest of the UK …. 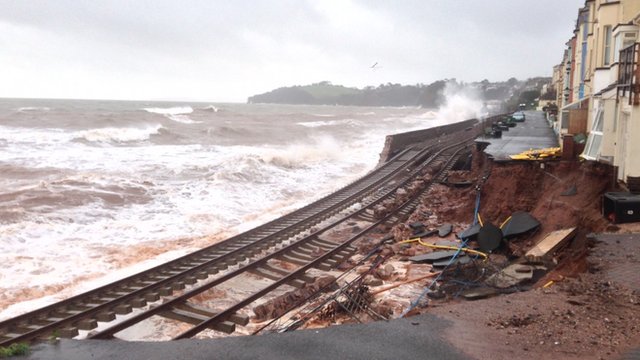 The sheer force of the waves breached the sea wall and tore away the ballast beneath these rail lines – built by Isambard Kingdom Brunel in the 1840s.  And as well as the railway, the sea undermined several houses leaving families homeless for the time being at least.

Again leaving families homeless and a scene of total devastation.  Luckily Chillington is a little inland and we’re tucked into a  hollow that shelters us from the worst of the weather.  Coombe Leigh is more than 200 years old and solidly built from cob and stone, but even so, I could feel the house shaking and rattling in the wind when the storm was at its height – very scary indeed.  I was woken at 1.30 am by Daisy and Ben in full-on guard-newf mode, their deep barks adding to the commotion all around.  On investigating the cause of their concern I was relieved to discover that it was just a plant pot that had blown against the back door, startling them into wakefulness and not my summer house blowing away! 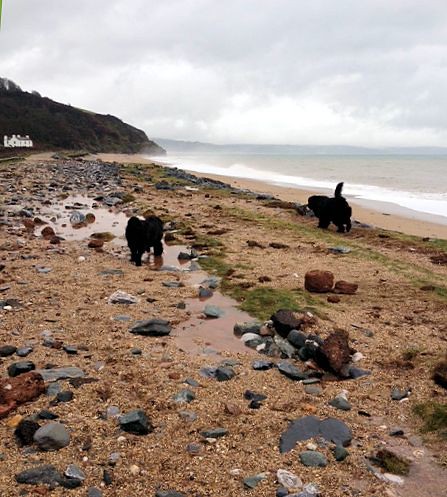 Sadly what remained of the grass was covered with dead earthworms – I guess the salt water must have killed them all.  So now seems a good moment to remind myself that spring really is on the way …..

And also send my thoughts and best wishes to all those reading this who have also been affected by the extreme weather everyone seems to have been experiencing recently – whether rain, gales and floods, snow and ice or high temperatures – hope things begin to calm down very soon.

Meanwhile, I’ll be back tomorrow with the results of the giveaway.

Oh my. Such devastation. Thinking of and praying for the people who have been affected by these storms.

We saw it on the news last night here in New Zealand – looked aweful. glad you and the neufes are safe.

Some parts of the South West have been severely tested over the last few weeks, so I’m glad that you weren’t personally too badly affected. We live on the Mendip Hills and as we drive down the hill into Wells we can see the dreadful flooding on the Somerset Levels. Our fields and gardens are waterlogged and the lanes have little streams of water running down each side, and often down the middle as well, but there’s not too much flooding here; though the River Chew which runs through the centre of the village is looking very full. Fingers crossed that spring really is on the way, and winter will disappear soon taking the rain and winds with it.

Did you take the video? I love Slapton and Torcross it looks so horrible.
I live in West Somerset. The flood victims are being taken to Bridgwater and the trains stop at Taunton for the southwest, both places are fifty minutes from where I live.
Julie xxxxxx

Glad to read you, Ben and Daisy are safe Helen. We see so much devastation on the news and can only be thankful that it hasn’t affected us as it has so many. So much land underwater, so many homes ruined and thinking of those people, livestock and wildlife is heartbreaking. Hopefully the worst is past and better days will be here soon. xx

Those pictures are incredible and frightening! Mother Nature has been flexing her muscles quite a bit all over the world this year. I hope no one was hurt from this damage.
Keep safe, you and your pups 🙂

So sorry for everyone’s loss. Glad you and Newfies are safe.

It’s always sad to see so much devastation to homes and nature. My prayers go up for all. So glad to hear your home is okay.