Yesterday we all set off into Wells for lunch, and to see some very special visitors to the city.  When we arrived everywhere was buzzing! Stalls had been set up down the High Street and in Market Square some fairground rides were doing brisk business.  Chestnuts were roasting and wine was being mulled …. There was carol singing and a brass band.  In fact all the crowds and noise became rather overwhelming after a while and we were glad to escape into the grounds of the Bishop’s Palace for a little peace – though not quiet as the ducks and seagulls, excited by all the commotion, added their own noise to the general cacophany.  The pictures below look very tranquil, but if I had sound as well, you would hear lots of squawking and quacking too …. But lovely though the moat is, we had come to see some quite different animals …. 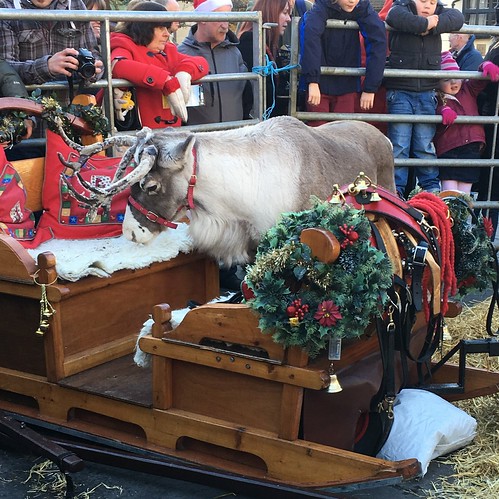 Some beautiful reindeer, all the way from their home in the Scottish Cairngorms.  They were so calm and obviously very well cared for, and I was able to amaze Rosie and Dan with some little known facts about these fascinating creatures thanks to the article I researched and wrote for the December Bustle & Sew Magazine!  Did you know that they are the only species of deer where both the males and females have antlers? 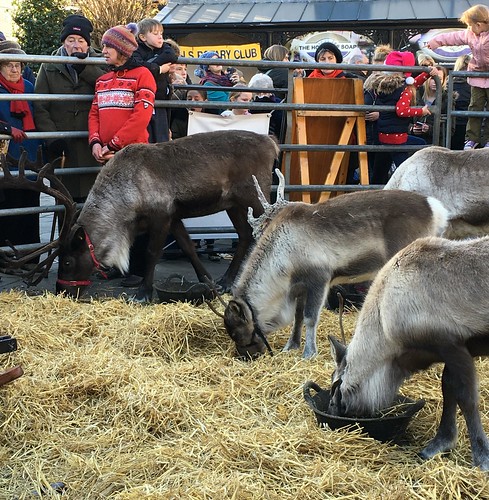 They had lots of thick straw to keep them comfortable and seemed totally oblivious to the noise around them.  Freddie, my little grandson, was captivated by them and kept waving, trying to attract their attention and seemed very puzzled when they didn’t wave back at him!  Then on the way back to the car we spotted a stall selling Christmas wreaths.  Rosie invested in a traditional mix of holly and ivy for her front door, but I rather liked these ones …. 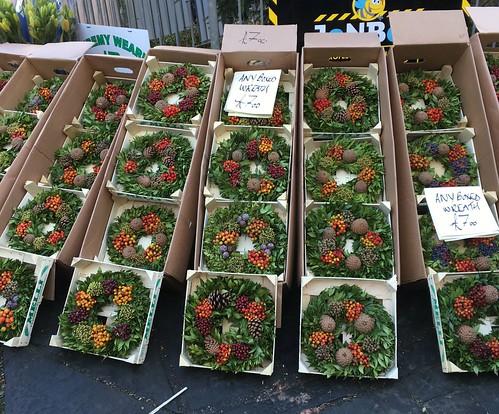 They remind me of autumn hedgerows with their mix of pinecones, berries and nuts.  And then home again where the terrible twosome were eagerly anticipating their somewhat delayed daily walk.  They’ve been loving the cold frosty weather we’ve been experiencing lately – basking on the cold patio stones (Ben) and rolling around on the frozen grass (Daisy) .. 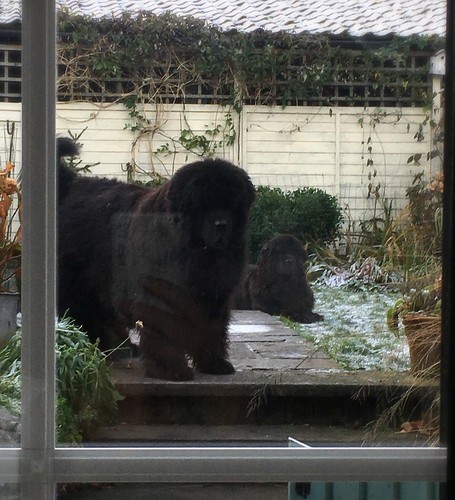 Here they are this morning – apologies for the poor quality – I was INSIDE in my warm kitchen trying to persuade the naughty pair to come indoors.  As you can see, Daisy (lying down) is pretending she can’t hear me calling at all, whilst Ben is simply being defiant – it’s quite clear he has no intention of coming in out of the lovely freezing cold garden!  So I left them to it and returned to my sewing – I have finished my little stitching bear ….

And the hand embroidery tutorial will be in the January issue of the Bustle & Sew Magazine.  This issue is turning into a bit of a hand embroidery special, but then nothing could be nicer than snuggling indoors with your stitching during these cold winter days (unless you’re a Newfie of course!).

Helen he has turned out great, I saw a partly done version of him you posted on FB. I can’t wait for the January Magazine if he is in it x. What a great job.

Aw thanks Dale, yes he is indeed in the January Magazine as a hand embroidery tutorial xx