Around about now is when the growing season really begins to get growing, though this being England, it can vary a great deal from year to year.  But this year seems to be as average as it gets and so I’ve been busy with my vegetables – leaving the flowers to my husband, the Engineer.  Today it wasn’t too cold, too wet or even too windy so the dogs and I decided to take a little stroll down the garden. First we stopped to inspect the contents of the cold frame – nothing too exciting there unsurprisingly as this latest batch of seeds were only planted at the weekend.  Then we set off in procession.  We always travel in the same order – Daisy first, followed by Rufus, Ted and finally me bringing up the rear.  I have no idea why this should be so….

But it is!  We went past the old swing, now refurbished for our own grandchildren.  When we arrived at Station House in 2019 the bottom of the garden was so overgrown we literally had no idea there was a swing here at all – it was uncovered by the garden clearance men to everyone’s great surprise. Now it’s a very popular summer activity for the little ones. The bottom of the garden is where the old kitchen garden used to be, and where our shepherd’s huts now stand waiting to be fitted out for visitors next year.  We’ve planted new trees to replace the ones that were old and diseased and they’re just starting to come into blossom – this one’s a cherry I think.

My broad beans look strong and sturdy – these were planted in the cold frame in mid-March and brought outside at the weekend after the spell of cold frosty weather had passed.  There’s no more frost in the forecast at present so I’m hoping my decision to give them a head start will be the right one! My garlic that I put in in the autumn is doing well and my new shallots and onions are beginning to appear above ground.  My alliums have big fat green bulbs on them…. So I’m hoping for plenty of purple flowers to bring indoors in June.  While I was inspecting my raised beds, the dogs decided to inspect the rabbit holes that had appeared near the shepherd’s huts… As you can see, we have a lot of work to do this summer before they will be ready for guests.  At the moment however, our main harvest appears to be nettles… Lots of them!  But they are actually a super-food and we’ve enjoyed eating them a couple of times already this year.  I recommend the blue cheese and nettle rarebit over on the BBC food website….

They are actually really tasty and you can find the recipe HERE. Be sure to identify your nettles correctly though, and wear gloves while picking them.  I recommend TWO pairs, as I was stung though my plastic gloves which made my fingers tingle all afternoon – not great for stitching!

Then, once our inspection was complete we headed back up the garden – in procession once again, and still in the same order… Ready for a nice cup of tea (me) and a biscuit (the dogs)!

Haaa! Love the darling troupe!! What a wonderful website!!! Incredible projects and heart-lifting stories!!!
Thank you so much!!!
Susie D. 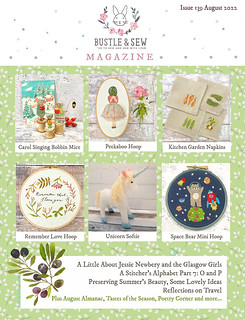