Sometimes it takes me a little while to catch up on things…. and in this case Daisy (who feels very strongly about this) and I were a bit late learning about National Black Dog Day which was actually exactly one week ago on Monday 1 October in the USA. Black Dog Day was created by Colleen Paige – who went to an animal shelter in 2013 to adopt a dog and was moved to tears after seeing a seriously injured black dog begging for help with longing eyes.  The staff were less concerned about her condition than they might otherwise have been and told Colleen that “since nobody wants a black dog she is most likely to be euthanized.”  Colleen adopted the dog – who over the course of the next 12 months made a full recovery – but not only that she formed Black Dog Day on the anniversary of her death to highlight the plight of black dogs everywhere. I had no idea that in shelters black dogs were continually passed over in favour of lighter coloured canines.  In fact black dogs and cats belong to the “harder to adopt pets” category and take four times as long to find their forever homes.  I have been lucky enough to own (to date) three of the most beautiful, loving and kind black dogs that any owner could wish for and was horrified to learn about this. 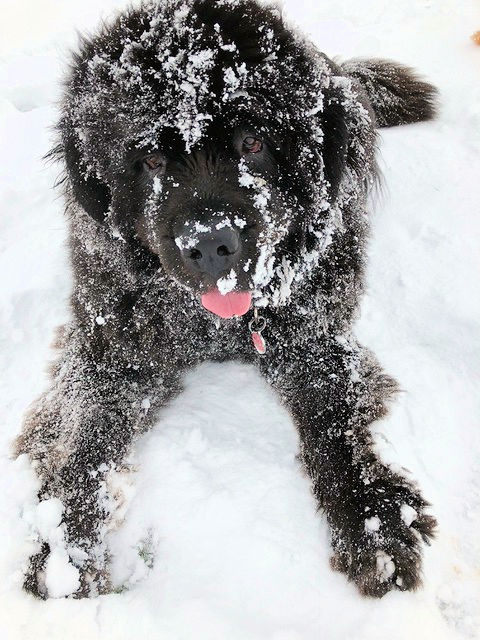 Daisy says “you can always find your black dog in the snow!”

Just like any other dogs, black dogs can be loving, caring and good natured.  But movies, stories and illustrations have given them a scary reputation – imagine the Hound of the Baskervilles for instance, but in reality they’re nothing like that – just regular dogs wearing a dark coat.

If you’d like to learn more then please just CLICK HERE to read the full article about Collette and Black Dog Day – and spread the word – black dogs are no different to any other colour! Daisy says “I was such a cute puppy!”

I have been very backed up in my emails and just read in today’s post about black dog day. I also have an adopted black dog Newfie/flat coat retriever and he has been the best dog I have ever had. I will always love my adopted Golden’s, but Murray(!) is the sweetest. I hope more people will be aware and make an effort to adopt these beauties. I
Of course I would love to post a picture of Murray but I don’t see a way to add it.
Maybe a black dog project would be fun.

Aw, Murray sounds great, what a lovely mixture. Sending love and hugs from Daisy and Rufus too xx

I had no idea the stigma of black fur extended to dogs! Having had two of the most beautiful and glossy black cats on the planet, I can also attest to the excellent disposition and charm of black furry friends! And they were never the tiniest bit unlucky!
Linda B. XX

I totally agree Linda, and of course Daisy thinks she is the prettiest canine that ever there was. I’m hoping to add another black dog to the family next year, have been in contact with Ben’s breeder – so paws crossed. Love to you and yours xx

I’ve had three black dogs. A flat coat retriever and two flat coat x collie. They have all had fantastic natures and I’ve loved them all dearly ❤

They sound adorable Moira! We now have one gold and one black dog – so whatever you’re wearing the dog hair will show! xx