This week is Crufts week, when arguably the world’s most famous dog show prepares to open its doors for the 110th time here in the UK.  I found out when reading the paper this morning that there really was a Mr Cruft – Charles Alfred – who was born in 1852.  He worked as a travelling dog biscuit salesman before he had the idea of staging a dog show to promote his wares.

In the late 19th and early 20th centuries Crufts exhibitors received special treatment when travelling by the London & North Western Railway.  Charles Cruft had helped to design their special dog carriages (each with its own water trough) and the railway regularly had representatives at the shop to help both exhibitors and dogs with their journeys.  I’m sure Ben and Daisy would approve of these travelling arrangements.  Although neither has ever been on a train, Ben does enjoy riding on the double decker bus between here and Dartmouth with his special doggy day rider ticket!  In honour of this special “doggy” week, I’m re-releasing my “Best in Show” applique pattern: 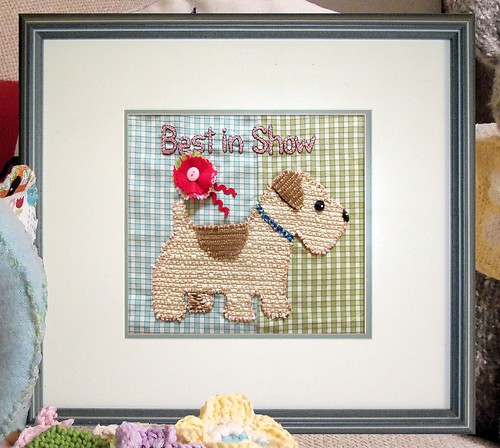 It’s a really easy project – great for beginners, or a quick make for the more experienced.  If you’d like it, then please CLICK HERE to download your free pdf file.  Meanwhile – here’s another Crufts fact gleaned from my newspaper this morning…

In 1974 Crufts featured in a murder trial!  A jury at the Old Bailey heard that a man who had started an affair with a woman he met at Crufts was then stabbed to death by his wife, with the knife he had used to cut up their dog’s food.

You will have to buy Daisy a special doggy day rider ticket too!
Already to downloaded!
Julie xxxxxxx

I love history, and I enjoyed the historical facts behind Crufts. I’m always amazed how events begin and how they get named. But the vision of Ben riding the bus with his special doggy ticket will bring a smile all day long…What a great children’s book that would be!
Thanks so much for the adorable “Best in Show” pattern! I love him!
X Linda

Is Daisy registered for the show? She will win hands down. Although I think Ben might prefer the biscuits. I will have to try and print out this pattern and make it. I am still a novice at sewing. Thank you for sharing with us all.

Helen,
Thanks for the adorable pattern!
I always find it interesting how things get started. What an enterprising man Mr. Crufts was. I wonder if he ever thought that his idea to help promote his product would morph into what it has become here in the 21st century!

Love to hear the background history of interesting things and places, thanks for sharing!8PMB

Oh! Thank you this bit of trivia! Loving it! Will you be attending the dog show?

Thank you for the pattern too! I just might give this a go!
So sorry to hear of your Queen being hospitalized too! She really is an amazingly healthy lady. Wishing her a full recovery.

Hi Valerie – no, I don’t think my scruffy pair would win any prizes – though Ben’s grandad won Best in Group a few years back.

As a new quilter, I have yet to do applique, but as a professional dog trainer, I think it only right that my first applique project be about the greatest dog show in the world. I am excited to make this! I plan to frame it, too, and put it up in my sewing room. Thanks! This design is definitely four paws!