Or … an alternative title … how Ben is going to be totally disgusted with the new addition to our home!   This is because we have decided to invest in a wood burning stove to toast our toes during the chilly winter months.  Our central heating is oil-fired and has become more and more expensive to run but – we live in a rural area and nice, well-seasoned logs are in plentiful (and cheap) supply.  We do have an open fire, but tend to light it only at the weekends, whereas a stove can remain lit all day needing, hopefully, much less attention than the fire. 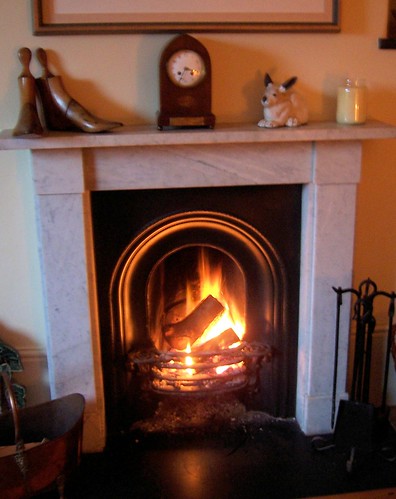 Ben will not be happy that we’ve acquired a stove.  Like all of his breed, he has an exceptionally thick and woolly coat.  This means that, even in the depths of winter, he loves to stretch out on the cool slates of the hall floor, totally ignoring his lovely cosy bed strategically positioned just under the radiator. Although a cold draught often blows under our front door (the perils of old houses), I have never needed a draught-excluder  as he loves to lie with his spine along the bottom of the door – effectively stopping any chill air from entering the hallway.   Amy was just the same – and it was so funny watching her when we lit the fire – she would start off stretched out on the rug in front of the fireplace, then as the heat built, would edge further and further away until she could stand it no longer and, casting many reproachful looks at the basking humans, would take herself off to cool down in the hall!

As tomorrow (when the stove is arriving) is likely to be busy, I thought I’d take a moment today to show you the completed embroidery for my 2013 Journal Cover pattern.  It’s going to be in the December magazine next week ….

… and shows an apple orchard through the seasons of the year.  I need to add some patchwork borders and make up the actual cover before I take more photos.  I thought it would be a nice sort of project to stitch over the Christmas Holidays ready for the New Year.

And finally – while thinking about  holidays – I would like to wish all my readers in the US a very happy Thanksgiving tomorrow. 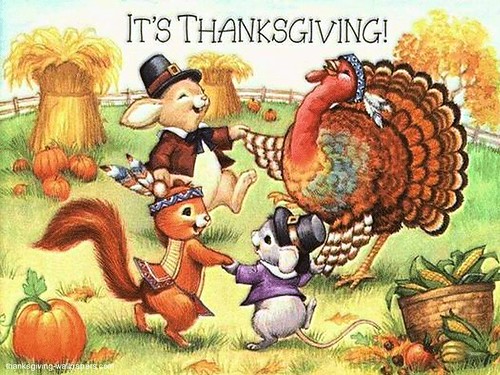 Happy Thanksgiving to you all!

Oh you’re going to love the heat of a wood burning stove! I too live in a rural area and I heat my house exclusively with wood. I am fortunate enough to own my wood lot so fuel is easy to come by… well, it’s a-ton-o work to cut, gather, split & stack but worth the effort! Poor Ben will have to adjust though. Thank goodness he has the hall! Hopefully he won’t take too long to forgive you.

Beautiful fireplace, Helen! There’s really nothing like a wood fire…

Looking forward to the next e-zine issue and the journal cover pattern! I love the new Rosie and Bear design with the seasonal apple orchard and running rabbit. Ideal for a journal.

Thank you so much for the Thanksgiving wishes! We’re staying home this year so we’ll have plenty of leftovers from the feast which I admit is my favorite part of the holiday!

Oh I love a wood fire and we have an airtight wood burning stove one is burning right now!! It is how we heat our old Ranch House, with all many drafts, and would comes from our 16 acres, with many oak, pine and other types of trees. Or small Chihuahua loves the heat but out BIG Boys (Black Labs) find it too warm after a while and love to sleep out on the breezeway in “their chairs” or at least they think that they are theirs!!!!

Thank you for the Thanksgiving wishes, look forward as always to the new ezine! And all the wonderful projects to look at and drool over, then figure which one I will make first!! 🙂