First of all, thank you so much to everybody who entered my Reindeer Kit draw.  I can hardly believe the number of comments – and all your wonderful – and so creative – suggestions for his name.  I am sorry to say that I have been so busy reading and chuckling over(!) your ideas, that I haven’t yet counted all the entries, taken out any duplicates, applied the Random Number Generator and identified the winning commment.  I will do that later on today after I’ve taken Ben out and announce the winner tomorrow.  Promise!

Meanwhile .. I thought you might like to see how, when Bustle & Sew was very young, giveaway winners were chosen – below is an extract from a blog post from 3 years ago when Amy (Ben’s adoptive mum) was still with us …

The comments were numbered in the order they appeared on the blog. Thank you to everybody who entered. The judges were ready …. 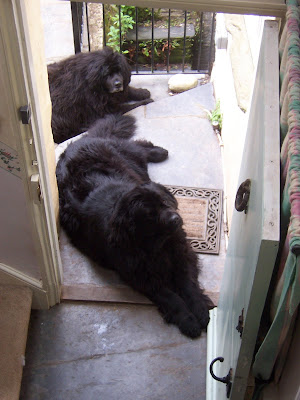 A yummy selection of dog-biscuits were numbered. (with non-toxic pen. Also testing was undertaken to ensure no preference for a particular shape of biscuit!) 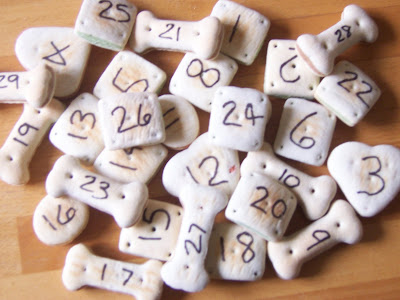 The paw (Amy’s) came out …. watch carefully or you’ll miss it – she’s very quick! (In fact I missed the winning biscuit – it had vanished by the time I pressed the button on the camera! This was a special re-run so you could see exactly how she did it).
And when the biscuits were lined up again, amid great objections from the judges, number 14 was found to be missing, so (back in 2009), number 14 won the prize! 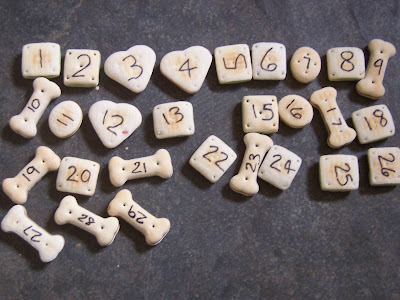 This isn’t the result of the 2012 Reindeer Kit draw, just a reminder of how we used to do it!    The Reindeer kit was amazingly popular with  many more than 29 entries, and I think I might lose the will to live if I had to write numbers onto 250 dog biscuits – though I think the black furry one would enjoy munching his way through them!

Click here to view listing
Meanwhile, just to let you know – I have listed the new set of Christmas designs from SewFlapdoodle in my Christmas store, “A Christmas Garland of Patterns” – that’s it above.  And, later on today, I’ll be sending out not one, but two free SewFlapdoodle designs to all my free newsletter readers…. so don’t forget to check your in-box later!
Back tomorrow with the Reindeer kit giveaway result!

Although I didn’t find your lovely blog until the early days of 2010, I remember spending hours going back through all your posts and the many stories of Amy and Ben…I also remember very well ‘the dog biscuit draw’ and chuckling all day! Thank you for the reminder and sharing the memory today…and for, once again, bringing a smile!
X Linda

That’s the downside of becoming so popular – for Ben I mean!

That’s too funny! If I let my dog do that I would have had ten or more winners! Very rarely does my rude pup only take one cookie!!