You might meet a little black baby bear!!  At least that’s what everyone has been calling that naughty Miss Daisy.  Ben is feeling much better now, and the simple expedient of removing his collar has stopped her pulling and twisting his neck.  I don’t think he’s very likely to run away while we’re out, and if we did become separated (1) everybody round here knows who he is and where he lives; and (2) he is micro-chipped.

Meanwhile, as well as black baby bears, here at Coombe Leigh we have other colours too ….. 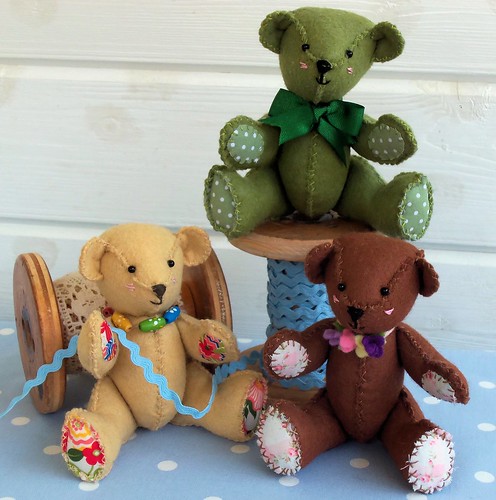 A new pattern for the April Bustle & Sew Magazine.  I’ve never created a bear softie before as there are so many wonderful bear-makers and designs out there – but these little creatures are, I think, some of the easiest to make you’ll find.  Once I’d worked out the pattern pieces and sewn the trial version, each bear took me about 2 1/2 hours – and they’d be wonderful little gifts for special people.  They’re not jointed so their limbs don’t move, but for me simplicity was everything – as well as cute appeal of course!  There’s a bit of a bear theme developing for the April issue … I’ve also finished a new and very simple stitchery also featuring bears …. 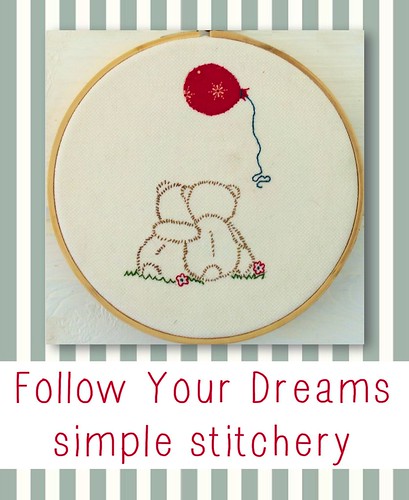 This little couple have launched their sky lantern (balloon) for a lifetime’s luck and hope that their happiness will last forever.  This is a really simple design and would be great for a beginner – or just a couple of hours stitching for the more experienced.  I do hope you like them both.

I love the little bears. You come up with some wonderful projects. They are all keepers.

Imagine those wee bears, holding a little cushion (stitched to their front paws) A perfect pincushion that way, because, of course, the bears themselves are too cute to stick pins in! Can’t wait to make one for myself, and maybe a quilting friend or two. 🙂

That’s a great idea Yvonne – I wish I’d thought of it!! xx

Awww love the bears! Definitely has the cute factor! Thank you!

They look so cute. I can’t wait for the April issue.

Berry Beary Cute Helen!! Glad Ben is better!!!! Can’t wait for the April Ezine!! Looks like a lot of Berry Fun!!! Glad you solved the problem with Daisy and Ben’s collar!!!!

I absolutly adore Teddy Bears and made a lot myself. would love to add them to my collection. you are so creative!
thanks for sharing
love
rina