I don’t know if I have ever mentioned before – but Ben, normally laid-back and placid as he is – strongly dislikes cats!  This is partly Amy’s fault as she taught him that cats were BAD.  Amy was adopted, coming to me at six years old, so I don’t know what had happened in her past to make her dislike felines so much. 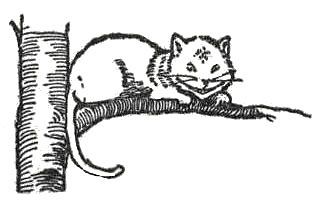 I do think however, that the natural friendliness of Ben’s nature would probably have overcome Amy’s teachings  if he hadn’t been badly scratched on his tender snout when, as a puppy, he was trying to make friends with the next door cat.  From that day on he has regarded cats as good for only one thing – CHASING!!    Cat lovers do not need to worry however, as Ben is most definitely not built for speed.  He has no chance whatsoever of  catching his tormentors, who delight in adopting the pose shown above and delicately twitching their tails when they think Ben might be getting bored of staring at them.

I remember an occasion, when Ben was still quite young, certainly less than 12 months old (but already weighing 100 lbs or more), when we all went to our local pub for a cool drink at the end of a hot day.  Townie Husband and I were relaxing, talking about the day’s events, whilst the two newfies snoozed gently at our feet.  Amy could be trusted not to wander away, and Ben’s lead was secured to our table leg.  All was peaceful – until the pub cat strolled into the bar. 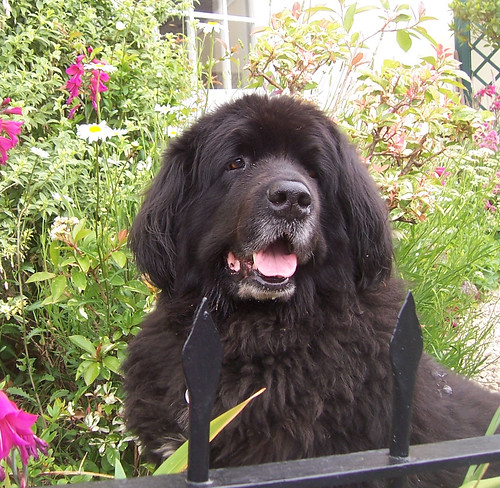 Amy looking as though butter wouldn’t melt in her mouth!

In a flash Amy was awake, alert and moving…. the cat shot out through the open door (luckily onto a peaceful country lane)….. Amy streaked after her….. I leapt up in hot pursuit whilst, to my horror, behind me I heard a loud crash as our table was pulled to the floor and started to travel across the bar behind the young and very active Ben who was determined not to miss any of the fun!

Townie Husband was left standing – mouth open in horror with two glasses in his hands that he’d had the presence of mind to snatch up before the table went over!  And the cat?  Quite safe and unharmed of course.  As I made it to the door I was met by a very sheepish Amy who – with her crippled legs – would never have caught it.  All that was left to do was to calm Ben and somehow restore order within! 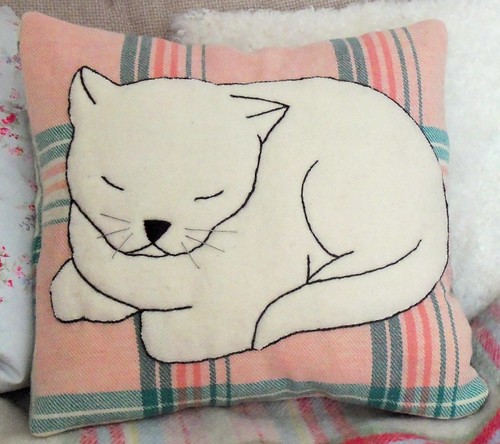 Such a sweet photo of Amy and incrediblely funny story….never a dull moment with pets, is there????!!!!!
Love the new kitty cushion cover!

Too Funny!! Just love our Furbabies and their stories! I have a bunch to tell about our Big Black Labs, Tank (yes very very large back lab 100+) and his brother Flintlock!! (98# and no weakling!!!) and our cats!! But not enough time and space!!! 🙂

Thanks for sharing Helen and Ben!!!!

Heehee! I loved that story! In this house, it has taken about a year but the dog and two cats are now the greatest of friends. Our pup had his share (and then some) of scratched snout at first, but now they’re all used to each other and they will actually play together. It’s very cute. 🙂

Thanks for sharing this story. It really made me smile. I could actually picture your poor husband holding the glasses.

Lovely cover.
Story story made me smile, but I do hope you and husband were allowed in the pub again……?
Julie xxxxxxx

Thanks Julie, yes luckily everyone saw the funny side … and as no harm was done to cat, table or even glasses, we were all forgiven quite quickly!