At the moment I’m trying very hard to get a little ahead with the Bustle & Sew Magazine (for a reason soon to be revealed) and so, even though the May issue hasn’t yet been published, I have begun on the June patterns.  The May magazine is out tomorrow – so if you’re a subscriber watch out for it in your in-tray, and if you’re not a subscriber and would like to learn more then please just click here to visit my magazine page.

Anyway …. as I was saying … I’m already working on the June patterns and have just finished my White Rabbit Hoop …. 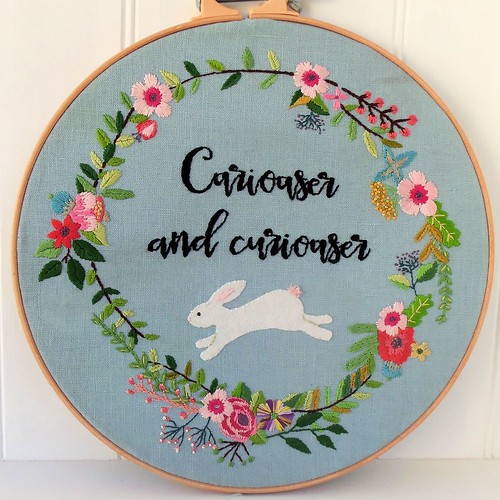 I’m really pleased with this, it’s turned out just as I had hoped.  You can’t tell from the photo but it’s actually really large, mounted in a 14″ quilting hoop.  I wanted it to be a statement piece as  I’ve seen lots of smaller hoop designs which are lovely, but of course embroidered art doesn’t have to be small-scale.  My White Rabbit certainly isn’t, though it could easily be reduced and worked in a 10 or 12″ hoop.  The bunny is appliqued white felt with a lovely fluffy tail …. 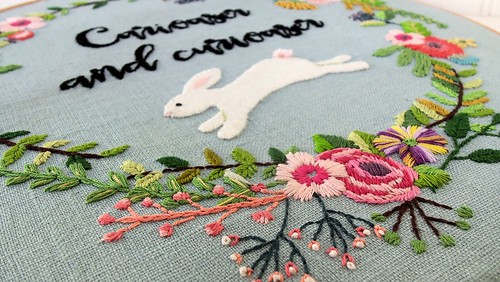 I chose a very spikey and eccentric font for the Alice in Wonderland quote – the famous “Curiouser and curioser” – and the flowers are deliberately exotic to emphasise the dreamy, almost hallucinogenic nature of Wonderland.  I’ve used a lot of straight stitch and three strands of floss throughout, so although it’s large it certainly isn’t one of those projects that seem to go on forever.  If you didn’t want to display your rabbit in a hoop, then I think it would work well as a cushion too.   I’m afraid the pattern won’t be out for another month, but there’s plenty to be going on with in the May issue …. 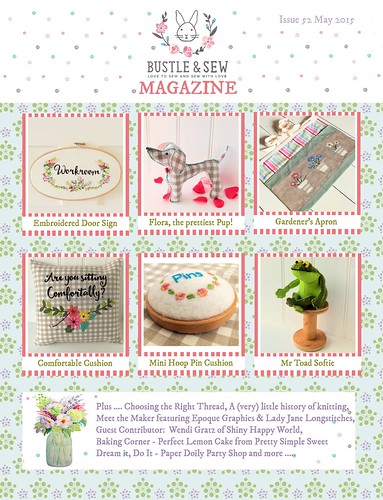 Don’t forget, it’s out tomorrow, so there’s just one last chance to subscribe and receive April’s copy too!

I can’t wait to stich this hoop! I’ll have finished university (eek!) by the time the June magazine comes out and be just about to go on holiday with my best friend so this is going to be my first project for that!
Holly xx

Thanks Holly, so pleased you like it – and guess you must have finals coming up so good luck!! xx

As usual a wonderful work!