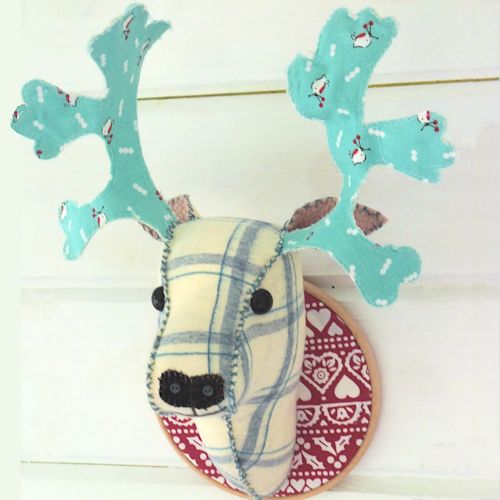 He has been my best selling pattern ever!  He’s been made to sell by crafters across the globe (I’m very happy about that, all I ask is for makers to credit Bustle & Sew with the design) 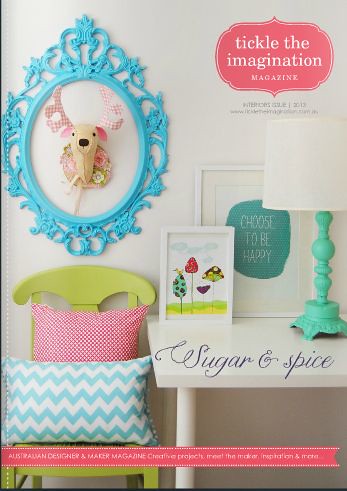 And even appeared on a magazine cover – sadly this maker didn’t bother to give pattern credit.  Ah well.

I’ve been wanting to update my deer head for some time now – after all I’ve learned a lot over the last 4 years since I released the original pattern, and I knew I could make him even cuter!  So it’s time to meet The new kid (or should that be fawn?!) on the block!

Though the basic pattern shape is pretty much the same, I’ve added white markings and changed his antlers so they’re lightly stuffed. I’ve also made his nose a little smaller and swapped buttons for cross stitch.  And I’m just about ready to mount the head, but I can’t decide … Which fabric shall I use?  I asked the newfies but they didn’t care.  Daisy offered to EAT the little deer head, but that wasn’t terribly helpful.    Here’s a better look at the two alternatives …. I’d very much appreciate your thoughts if you have any preference for either one.  And my new deer head pattern will be included in the October issue of the Bustle & Sew Magazine published on 29 September.

Darling! Haha I like them both too! However the red color makes him pop more so I think that would be my first choice.

I think he would really stand out mounted on the red background with white poker-dot fabric. He’s such a handsome fellow!
XX Linda

Hi Helen,
If it’s just between the two fabrics, I think the bright red with white spots lets the deer’s head stand out much better. The only problem is that the antlers have a sort-of-spotty pattern too so I was wondering if maybe a nice woodland green with a not too pronounced pattern on might suit him. Just a thought anyway.
Love,
Diana.
xx

Hi Helen, I think either choice looks good but personally I prefer the red tree fabric. Hope that helps.
Mary

I need this pattern. Urgently, please tell me how to purchase it??

Hi Jenny, you can find it in the softies section of our store. https://bustleandsew.com/product/unicorn-trophy-head/