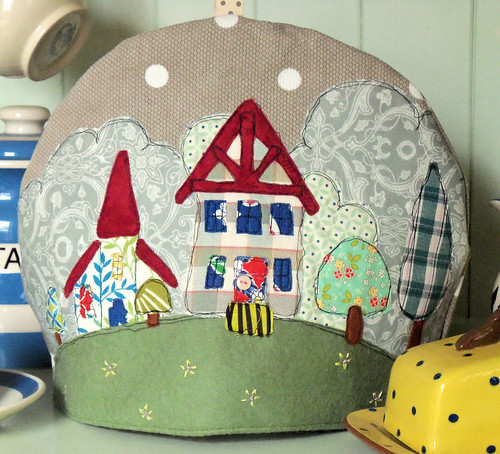 I have butterflies in my insides … I was feeling very brave when I uploaded this, but now I’m not quite so certain.  But anyway (deep breath) here goes …..

I want to introduce to you  my first-ever video tutorial.  It’s an explanation of the way I go about freestyle machine embroidery – and uses the tea cosy above as the learning project.  Before I recorded it I had no idea my voice sounded like that and  I’m not at all sure that I like it.  Ben makes a much better video subject than me, but sadly he is unable to (a) sew and (b) talk.  So there was really no alternative.  It’s in two parts ….

Please let me know if you like it – it’s quite long (hence the two parts) as I wanted to include everything I could think of so that it would be useful to someone who’d never tried this before, as well as those who just want to pick up some handy hints.  Fingers crossed!!

Helen, Thanks so much for the tutorial! For the most part I thought it was great. I don’t know if it was my connection with the internet or something else but I had a couple of short gaps where there was no audio in both part 1 and part 2. Also it was difficult to hear you speaking over the sound of your machine. I think I got what you were saying but maybe next time give your instruction before or after you demonstrate on your machine. I loved the demonstration… you know what they say, a picture is worth a thousand words! It really helped me to see you in action! I think it also helped to see that it’s not really so scary to just dive in and stitch away.
BTW your voice is lovely! (I know what you mean though, when I hear a recording of my voice I don’t sound anything like me and I’m not too sure I like it either.)
Thanks again!

Hi Helen!
This is such a charming, helpful video, i love it! Please make more! Also, you hAve a beautiful story-telling voice. You know like the “once upon a time… Etc” kind of lovely voice, don’t be shy about it.
The video was great and cheerful with the birds in the background that were so fitting!
thanks so much!

Well done you, how brave to make a video and it looks so professional. I loved the music, a perfect choice for your style. I think everyone is horrified when they first hear themselves on a recording, but you sounded fine, especially once you relaxed and got into the swing of things. Your video tutorial will be so helpful for beginners to this style of applique. I’ve done quite a lot of it, but had never thought of cutting the shapes before I iron them on. I tend to run a pin across the back which separates the two bits of paper, but I’ll certainly try your way with the larger pieces. And well done too, for taking your time and leaving plenty of time for people to read and absorb; I’m sure I’d have rushed things.

What a lovely tutorial! You’re so relaxed while doing freemotion embroidery, and I now feel for certain it must be where I make my mistake…hard to stitch a curve while holding my work for dear life! You have encouraged me to keep practicing!!! Thank you and thank you, too, for your tea cozy pattern.
I think you have a lovely, calming voice, Helen…so don’t be uncomfortable! Would love to see more videos…

Sorry mean to do this yesteday, its been one of those sort of weekends!
The video is great and I am now going to definitely have a go
Julie xxxxxx

I really enjoyed your tutorial and found it very helpful. It’s so good to see something for real occasionally instead of just reading the instructions. I would definately like to see more. I bought the sewing machine cover pattern yesterday, so now I’ve picked up a few hints, there is nothing stopping me. 🙂 Thanks.